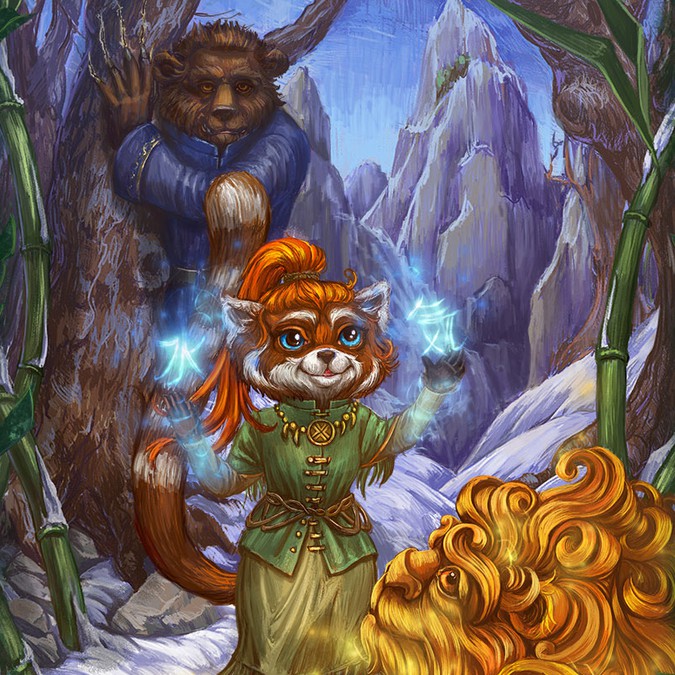 Need a cover for an anthropomorphic animal fantasy 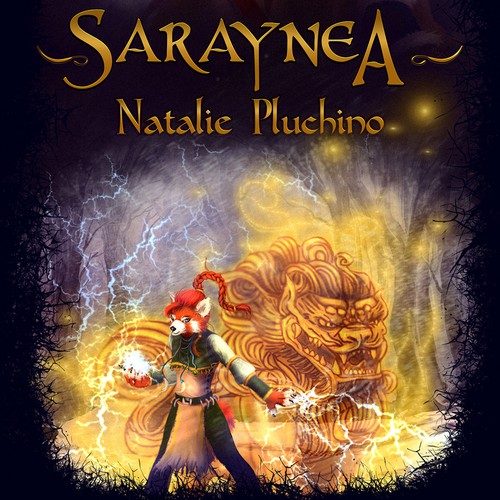 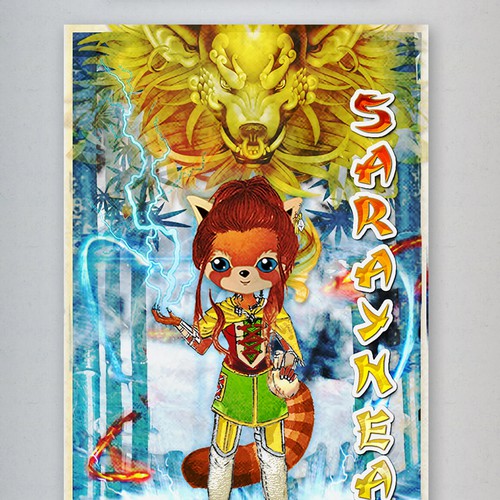 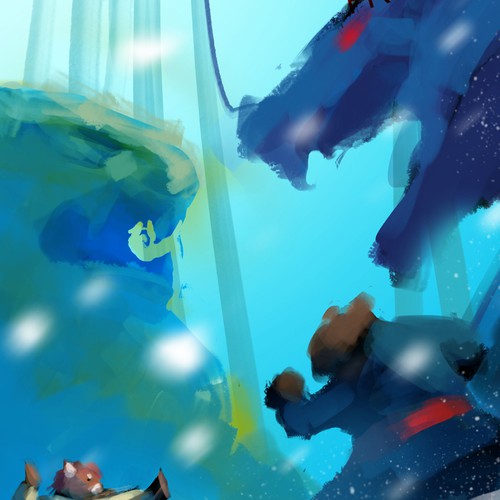 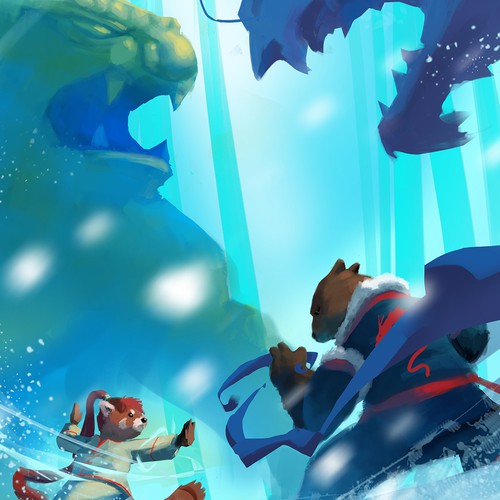 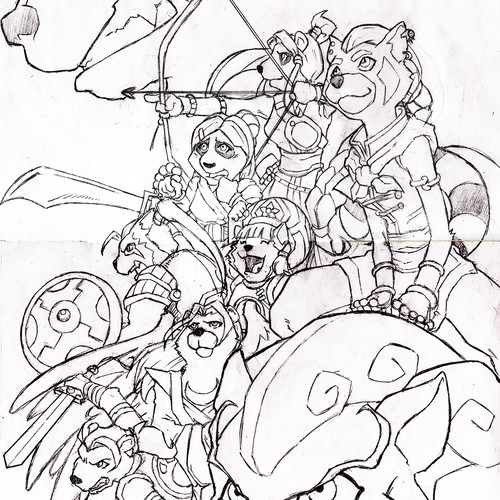 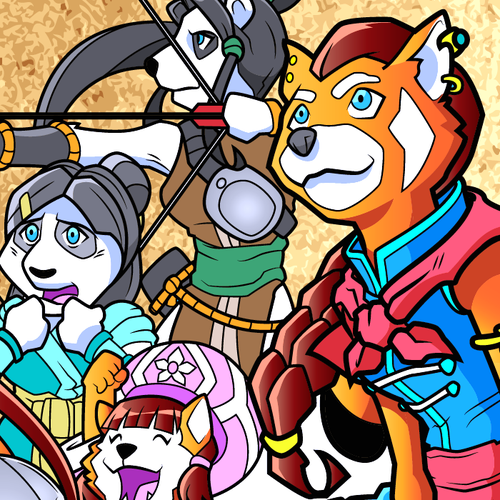 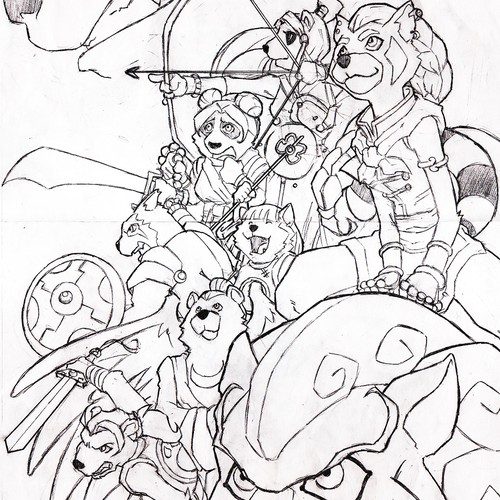 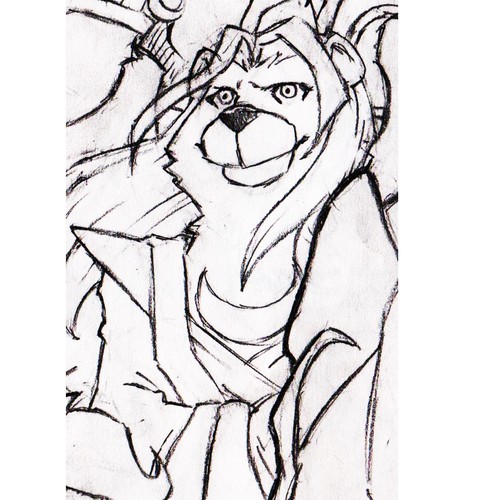 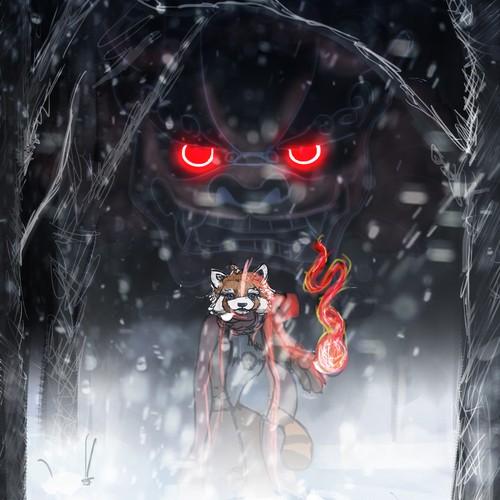 My book, Saraynea, is a fantasy adventure featuring anthropomorphic animals in a world inspired by Asian environments. My target audience is teen-young adult.

I need a cover for my Kindle book, so only a front is needed. I would like the title, "Saraynea" and my name, Natalie Pluchino, to appear on the cover. All the characters are anthropomorphic animals. They wear clothes and have hairstyles, but don't wear shoes of any kind. Some of the themes I focus on in my writing are friendship and teamwork without sacrificing a serious tone and sometimes bloody battles. The cover can feature just the main character or the main character and the villain. There are several supporting characters that don't have to appear on the cover, however if they are used I would like them all to appear.

The main character, Saraynea, is a late teen-young adult, blue-eyed, female red panda who, as a shaman, is able to control elements (lightning, wind, earth, fire, water) and communicate with elemental spirits. Her hairstyle is a long red half-up ponytail that is braided. She has a spirit partner which is a Chinese guardian lion who is of the "light" element (I was never able to decide on his colors/ patterns, however the light element is normally associated with gold/ yellow).

The villain is a large male brown bear who is also a shaman. Through his experiments with the dark element, he created a black Chinese dragon. His goal is to capture Saraynea and use her as a vessel for the dragon.

The supporting characters are:
-Feleine: A female panda who has grey and white fur and blue eyes. Despite her fur color, she is very pretty. She is around the same age as the main character, is a monk who does not use a weapon, and is shy and lacks self-confidence.
-Mynh: A young adult female panda with green eyes. She uses a bow and is very serious. Her hairstyle is a long black ponytail as well as having long bangs on both sides of her face.
-Achamaru: A young adult red panda who is a warrior wielding a sword and shield while wearing light armor (no helmet). She is friendly, but very protective, especially over her younger sister.
-Ayumei: A female red panda who is a very powerful mage and Achamaru's sister. She is the youngest of the team, but doesn't hesitate to help in a fight, and is always by her sister's side.
-Korramaru: A young adult female brown bear who wields twin swords. She is very short-tempered and aggressive when she fights. She has a tamed cobalt Chinese dragon that can breath lightning.
-Kheiryn: A young adult teal-eyed moon bear (Asian black bear) who wears a robe (robe colors could be black, dark blue, dark purple). She is a very unique character, having black wings on her back that she can manipulate to turn into black tendrils to fight. She is very calm and usually hangs around with Korramaru.

Common settings in the book are green mountainous forests and snowy forests.

Create a captivating cover design for upcoming sci-fi & fantasy novel, THE ONE-EYED KING
299 US$
My media company creates compelling infotainment, i.e. informative and entertaining stories (poems, short stories, etc.)
41
entries
7
diseñadores
YA Superhero Book Cover
USD 299
My book is a YA superhero novel about what happen when it's the popular good looking teenager who gets super powers a...
13
entries
4
diseñadores
Fantasy eBook cover for "Legion on the March"
299 $US
Production and publishing of high-quality audio, video, and written content for non-fiction and fiction audiences....
148
entries
27
designer graphistes
Book Cover Design: "Novel Explosives" innovative fiction
1.199 $
67
entries
13
Designer
Professionally Sexy Covers for Bear Shifter Billionaire Romance Series
299 US$
AJ Tipton Enterprises provides unique content for readers of romance....
24
entries
4
diseñadores
Create a striking book cover for a book that will make literary history
299 $
"We Are All Blue" marks the first time drama/theatre by a playwright from Botswana will be published!
103
entries
19
Designer