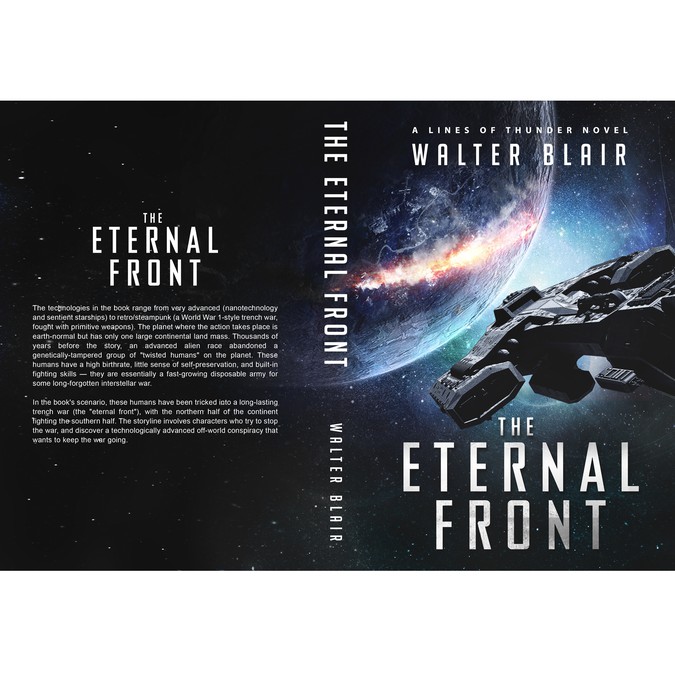 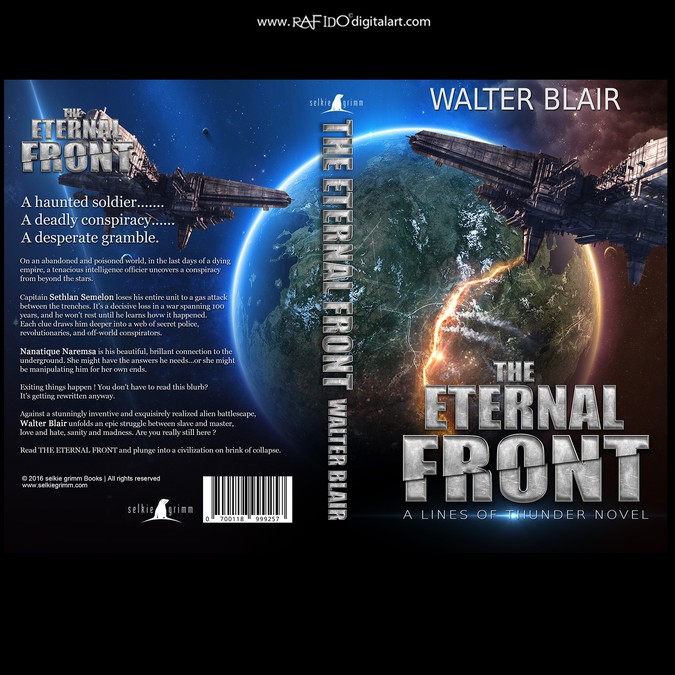 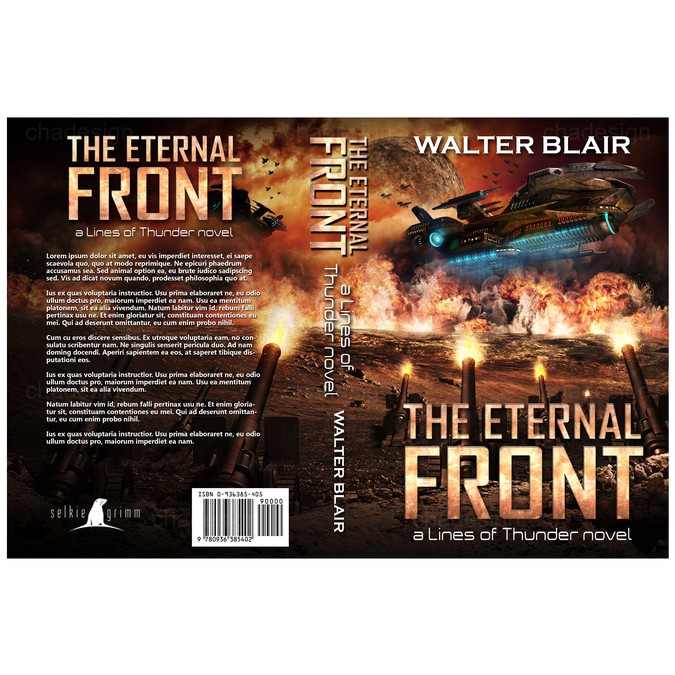 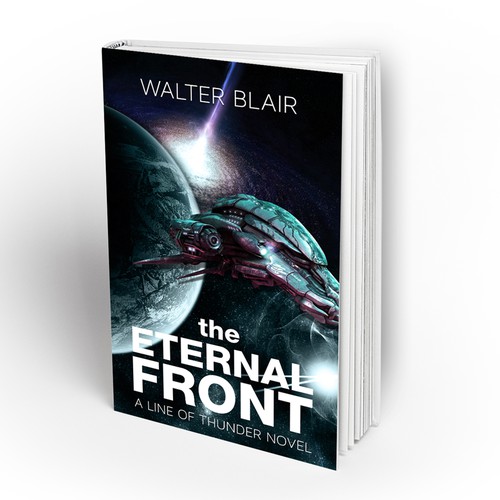 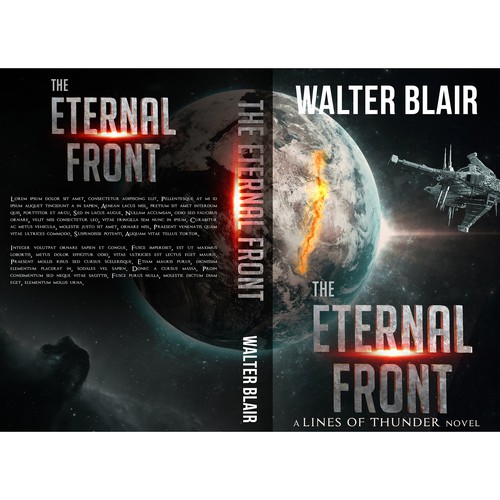 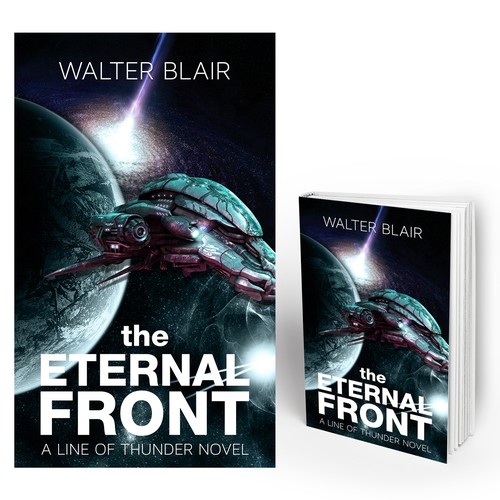 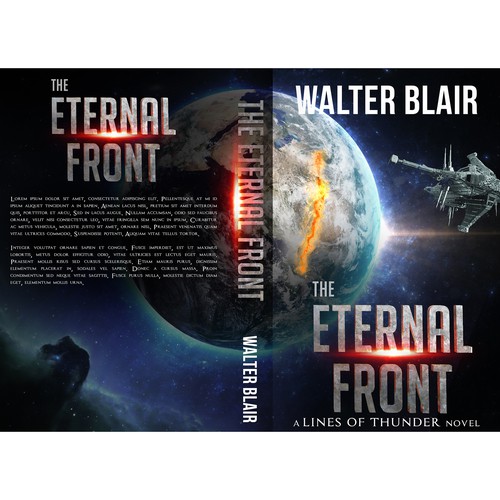 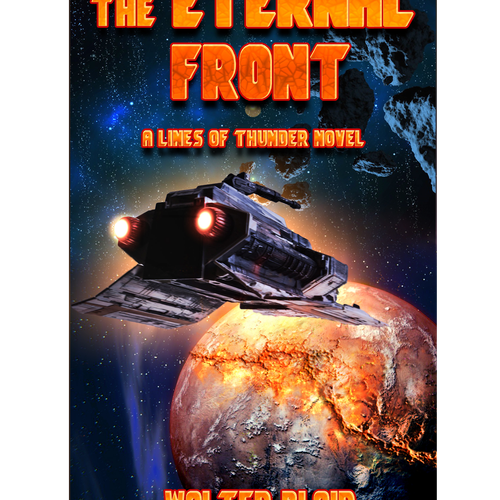 I write far-future military science fiction novels with a scope and feeling similar to Frank Herbert's DUNE or Iain M. Banks's CULTURE series. Readers are interested in interstellar empires, sentient starships, genetic modification, and nanotechnology -- as well as individual characters (human and alien) who try to survive all of those things.

This project is a book cover (both ebook and print) for a science fiction novel called "The Eternal Front" (subtitle: "a Lines of Thunder novel").

The genre is military science fiction, but it's not "marines in space." If anything, it's more "British empire with aliens (in space)." Tonally, the book gets close to Patrick O'Brian's "Master and Commander" series. The storyline has some of the complexity and depth of Frank Herbert's "Dune" or Iain M. Banks's "Culture" series.

The design of the print book interior is not modern/edgy sci-fi, but closer to what you'd see for a Charles Dickens reprint. Physically, the book is a chunky door-stopper (more information below).

The technologies in the book range from very advanced (nanotechnology and sentient starships) to retro/steampunk (a World War 1-style trench war, fought with primitive weapons). The planet where the action takes place is earth-normal but has only one large continental land mass. Thousands of years before the story, an advanced alien race abandoned a genetically-tampered group of "twisted humans" on the planet. These humans have a high birthrate, little sense of self-preservation, and built-in fighting skills — they are essentially a fast-growing disposable army for some long-forgotten interstellar war.

In the book's scenario, these humans have been tricked into a long-lasting trench war (the "eternal front"), with the northern half of the continent fighting the southern half. The storyline involves characters who try to stop the war, and discover a technologically advanced off-world conspiracy that wants to keep the war going.

The book cover SHOULD NOT have a military guy standing in an apocalyptic wasteland, or soldiers running/shooting/dying. This kind of cover was already developed (and it looks amazing!!) but it did not test well with certain audience segments including female readers.

The book cover SHOULD have some large-scope scene that reflects an element of the book's setting or scenario. See the attached prototype image for an example concept: [A futuristic spaceship hovers over a planet. On the surface of the planet, the trench war bisects the continent; it's so big and devastating that it's visible from space as a fiery, smoking gash in the ground.]

A cover which uses the same concept as this example, but with more realistic graphics, and improved design & readability, would be perfectly acceptable!

One other example concept (but no image available): [A view from the surface of the planet: a horizon with a arcing, glowing artillery barrage. Looming in the atmosphere above the barrage is a huge futuristic spaceship.]

The print book dimensions are 8"x5" page size, with a .8"-1.2" spine, but this might change for final publication. Other cover details like title/blurb may also change; as well, portions of the cover may be used for marketing collateral (advertisements, websites).

For these reasons, I'd like to receive a non-flattened layer file compatible with Photoshop CS6 or earlier.

The resolution of bitmaps should be 200-300dpi and the front cover should be crisp and sharp when it's converted into a 3000x2500px ebook cover. For full cover specifications, see CreateSpace for print, and Amazon Kindle publishing for ebook.

Horror artistry wanted for book cover.
$ 299
It's a book for late teens and adults. It's a dramatic horror book. Similar to THE WALKING DEAD except there is no ...
60
entries
12
Designer
Book cover: "The Warrior Mind" - Spartan Helmet or Warrior Helmet Graphic
$ 299
The 30 Day Plan to Overcome Information Overload and Achieve Any Goal
225
entries
44
Designer
Create an intriguing American Civil War novel cover
$ 799
I write American Civil War novels for ages teen through adult for the US market....
56
entries
18
Designer
I want to build a lasting business relationship with ALL of my clients.
£ 199
Author, writer of action, crime thrillers. Target audience will be fans of the genre (ie NOT YA sci-fi and fantasy r...
58
entries
13
Designer
The Girl Who Stopped Lying book cover
$ 499
We publish books for the Swedish market. Our books has a Christian message but our books are targeted for everyone....
91
entries
39
Designer
I have an awesome sci-fi book! can you make an awesome scifi book cover?
$ 400
Need a kick-butt book cover for the second book in my post-apoc sci-fi series. Are you a scifi artist? Jump on in!
127
entries
25
Designer