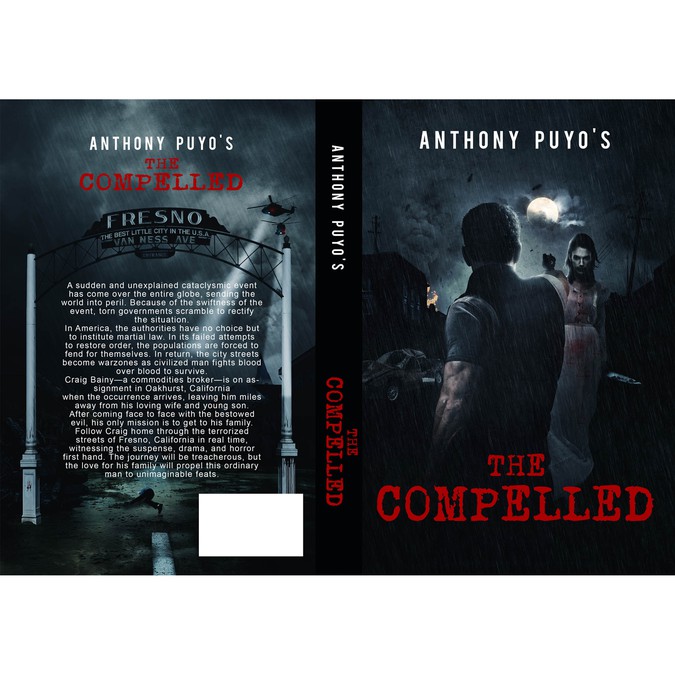 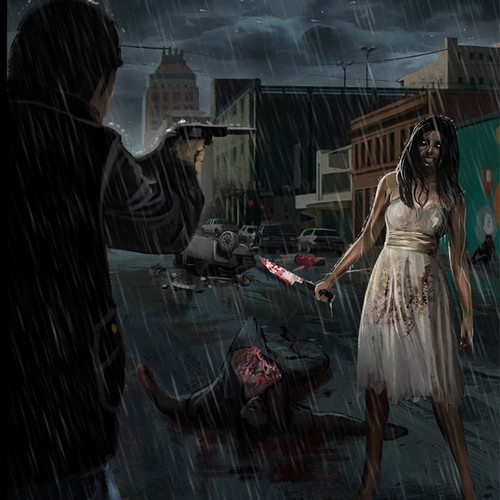 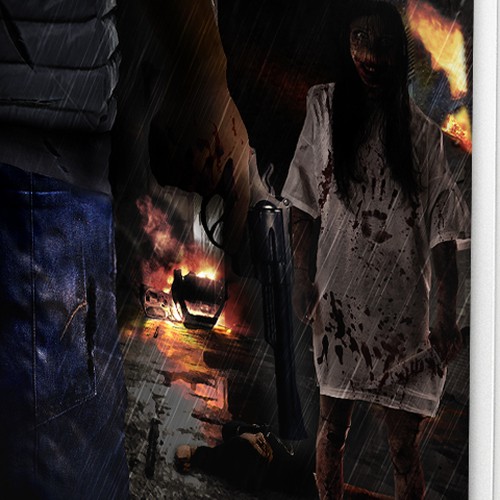 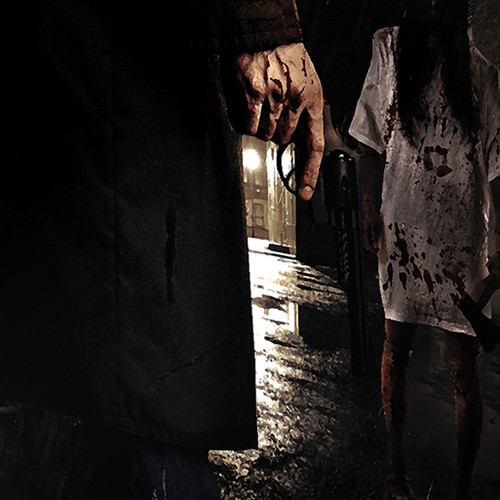 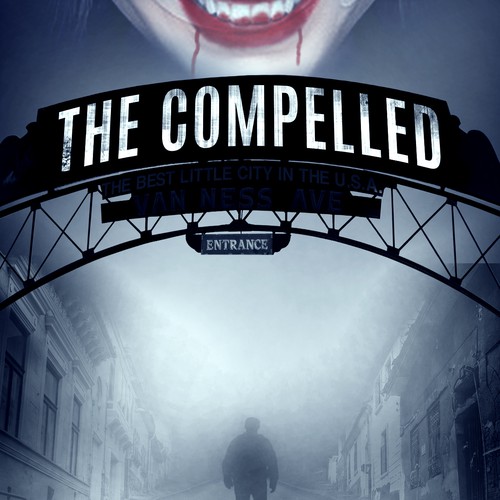 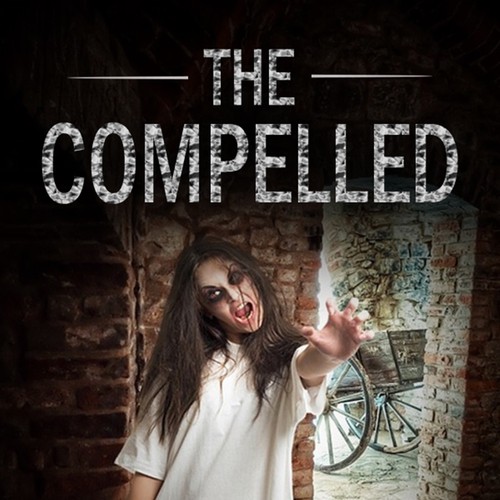 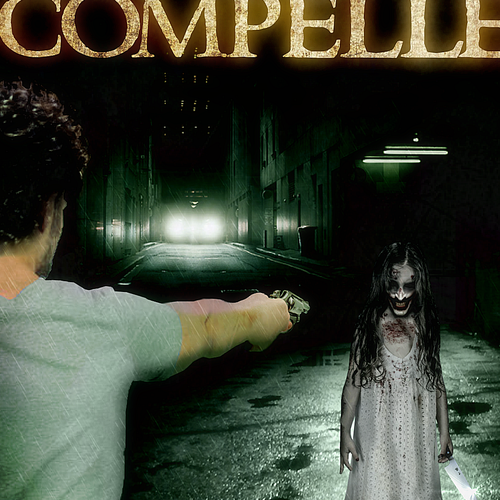 None, I'm an author.

It's a book for late teens and adults. It's a dramatic horror book. Similar to THE WALKING DEAD except there is no zombies.

Book Cover. It's a scene in the book. I'll send a picture of how I'm generally thinking it should look. I want my name in smaller letters than the title. It should read: Anthony Puyo's THE COMPELLED. As far as the letter type and color, I'll let you fit it best with the art. The scene takes place on a city street(modern day), it's night-time and it's raining. So I'm imagining a darker cover. There's a woman who's infected(mid 30's) walking towards my main character, kitchen knife in hand(the big ones). The infection causes people to become sadistic killers, this should show in her grin. It should be almost Joker like. Her eyes should be all black, which is a sign of the infected. She's wearing a white nightgown, barefooted, if it matters. Her mouth should have blood around it, since she was interrupted while eating a victim. Her hair is shoulder length, straight. Now my main character has a grey T-shirt on, if it looks better, give him a vest or jacket, I can write that into the story no problem. He has tight-curls of hair. Like in my horrible pic, you should only see him from the back. Remember, I'm not an artist, so though my pic is silly, I'm hoping you the artist can interpret that vision and bring it to life like I know you can. I already got one cheesy attempt and I discarded it. Back to the scene: My character is pointing a 357 revolver, wood-brown handle, black barrel. For the back cover, I uploaded a picture of a fresno sign. If you notice there is two beams, one on each side. Picture yourself by one of those beams, looking up. I want the sign to be shown, that's important, but I want the beam to partially show so you could put a bloody handprint on it. I put the scene I'm talking about in notes, since I could not upload. It's a serious job, so if you're interested you should probably read it. Main character is 37 years of age, slender, regular guy. In the scene he does have some bumps and bruises from an altercation. I don't believe it'll have to show if you put most of him out of the cover fading to black or something, just suggesting.

As some of you know, I could not upload scene, so pasted it at the bottom of this section. Please read to get a better grasp of what I need. I'm usually out of work at 11 a.m. pacific time. Contact me if you need anything. If anything is not clear, please ask. Good Luck! NEW: For anyone who wants to go outside the box. I did want a cover at one time of the city of Fresno California in parel, but the 5th wave kind of stole my thunder. But if you want to look up Fresno and do something with my character or characters, and the infected people with dark eyes, you can. I don't want you to waste your important time, but you can message me and I will give any scenes or info I can. NEW: I'm going to paste and copy scene from book here since I couldn't download it. Please read so you can have a better understanding of the art I need. ----SCENE: The half-moon helps give some light to the darkness, but it did nothing for the cold. Thunder sounds and lightning scorches the skies, and soon after, the rain came falling hard and making visibility muddy. Craig gets up the street—something alerts him, he slows his pace. He sees a shadow about thirty feet away. It’s a person crouching down over another. Craig couldn’t quite make out what is going on. To him, it looks as if someone has died and the person of interest is mourning.
Craig Bainy opts not to take any chances. He walks next to a building, hiding behind it’s shadow and inches his way closer. He Hopes to pass with no conflict. At twenty feet away, he realizes it’s a woman. Her back is turned to him, and she’s kneeling. She’s thin, wearing a white nightgown. Her long hair glistens in the rain and moonlight as she bobbed down time and time again.
Being that it’s a women, Craig’s fear eases up.
Poor lady. She must have lost her husband or child—maybe her sibling. He thinks this while he strolls over.
I’ll offer her some help. She can’t be in the open—It’s not safe.
A few feet behind her, hoping to not startle the women, he speaks softly, “Hey lady, are you okay?”
The woman turns her neck so fast she looked to break it. Craig’s worrisome face turns instantly to horror. The woman’s mouth is covered and dripped with blood. She gives a wide, sinister smile, showing her teeth while she stands. Her eyes are as black as the night sky, and they shimmer in the moonlight. Whoever is on the floor wasn’t being sobbed over, but rather eaten. Craig has never witnessed this among the crazies. This encounter is a shock to him. Craig slowly backpeddles, pulling out his powerful revolver. His hand is shaky.
She’s not going to let you escape. You’re going to have to kill her.
He points the hand cannon at the evil before him.
“You're not going to kill a lady are you? She says; a kitchen knife in hand.
She steps forward. Craig backs. The knife shimmers.
“Let me show you how good you can feel.” The women recites, licking the blood around her lips. “Mmmm,” she moans, “Yummy.”
You know what’s coming. Put her down . . . Now!
She lifts the knife, smiles wickedly and lunges fiercely.
This time, Craig did what he hadn’t been able to do since the Kesburg’s place—kill. He put a single shot in the mad-woman’s face, blowing all her right cheek and part of her forehead off. Her body swings around then falls, splashing in the light puddles of the wet road, right next to body she was eating.
Craig drops to his knees; a moment later he hurles. “That was disgusting,” he says in a whisper. “God forgive me.” ----This is the scene broken down. Please refer to content detail: other description: to know ages of characters and other little details.

Create the next book or magazine cover for Big Muddy Books
$350
I am a self-publisher
112
entries
39
デザイナー数
The Humble Fencer - a new 1930s action adventure novel book cover and web banner
AU$ 709
Upcoming novel is the first in a series of 3 (potentially 4) action adventure stories set in the 1930s and 1940s…
134
entries
44
Designer
Help Erin Mayes with a new book or magazine cover
USD 299
I'm a novelist
135
entries
43
diseñadores
Create the next book or magazine cover for Post Hoc Publishing
299 $US
small publisher of eBooks
37
entries
16
designer graphistes
Ranjit More needs a new book or magazine cover
$ 299
For a Fantasy novel set in the Hindu mythological Universe. Fiction.
42
entries
15
Designer
Design a scifi novel cover with elements of Arthurian legend
799 $US
The novel (and subsequent trilogy) is science fiction set in the modern day with elements of the thriller genre and myth
142
entries
31
designer graphistes