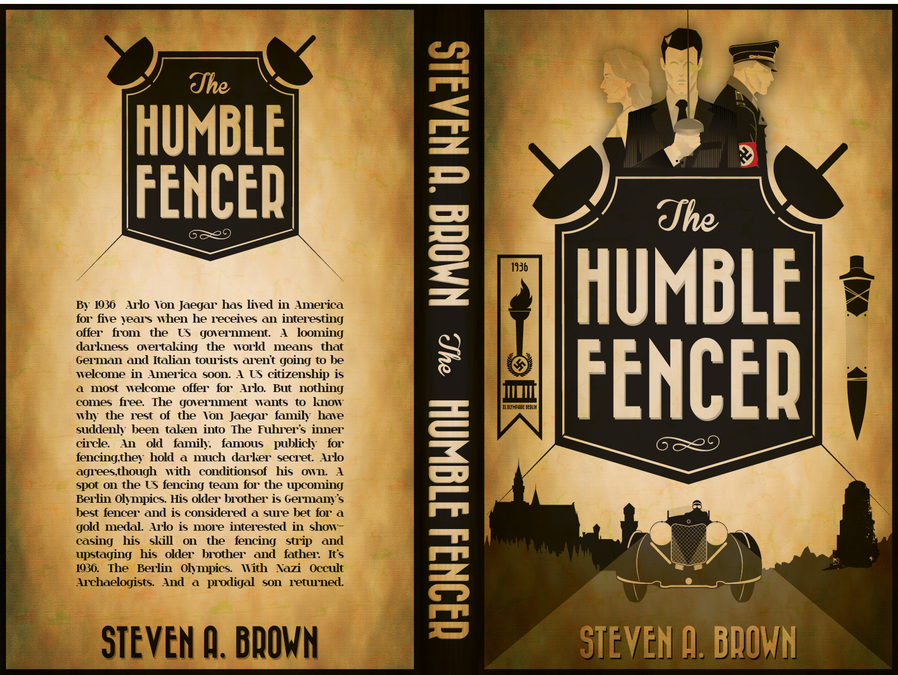 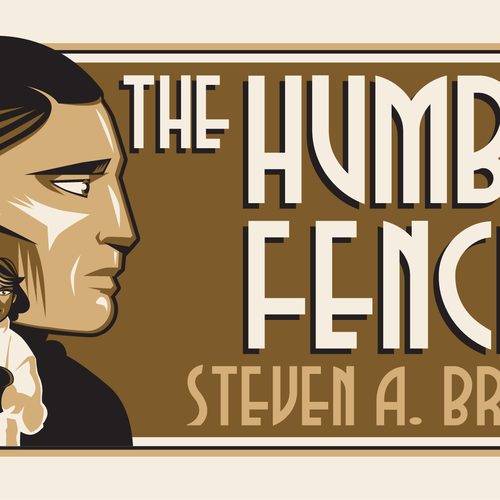 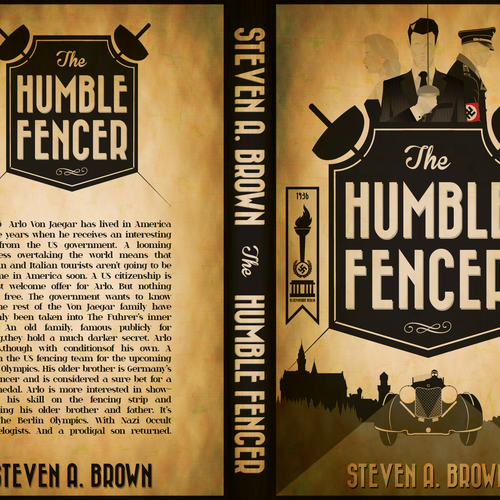 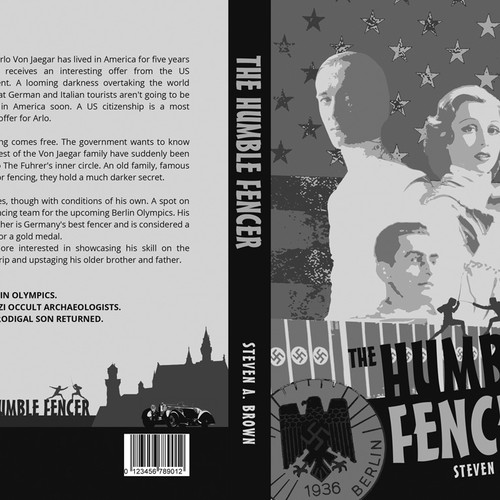 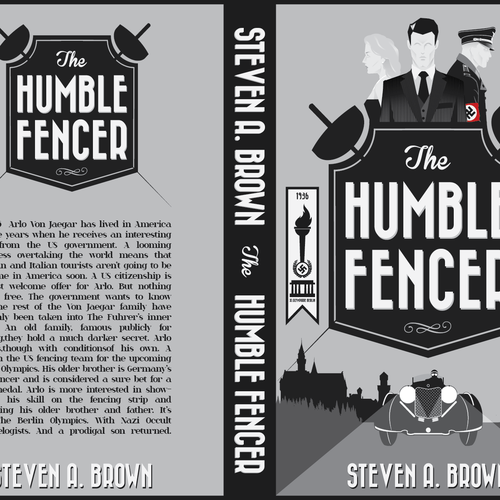 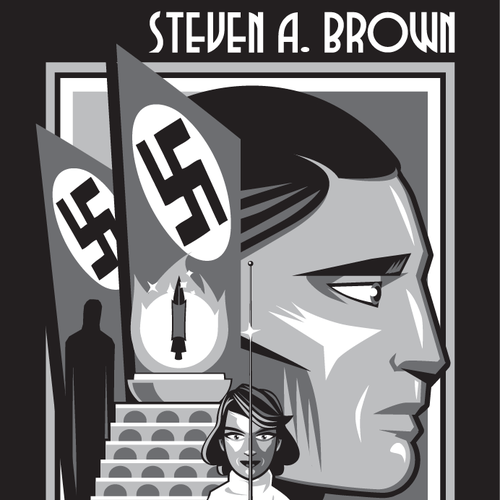 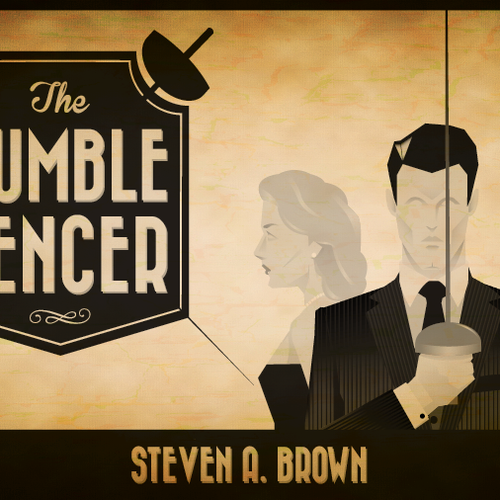 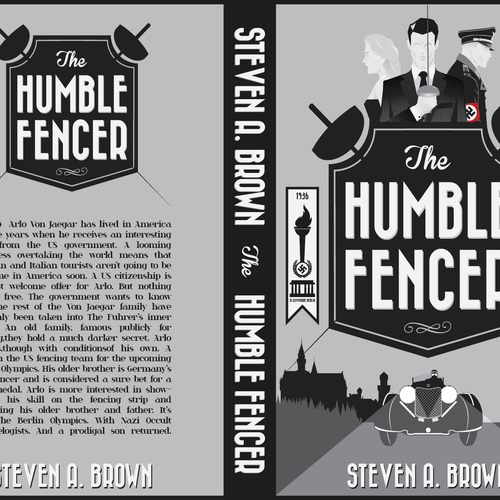 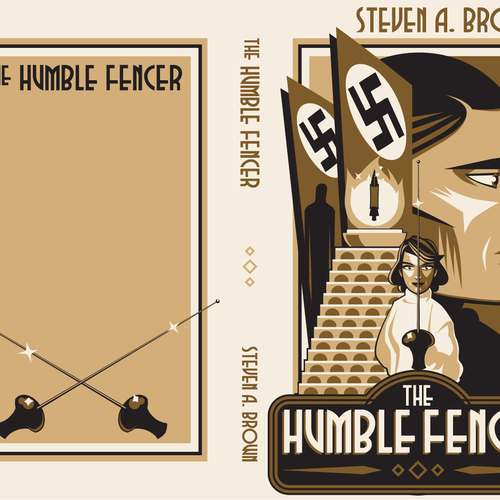 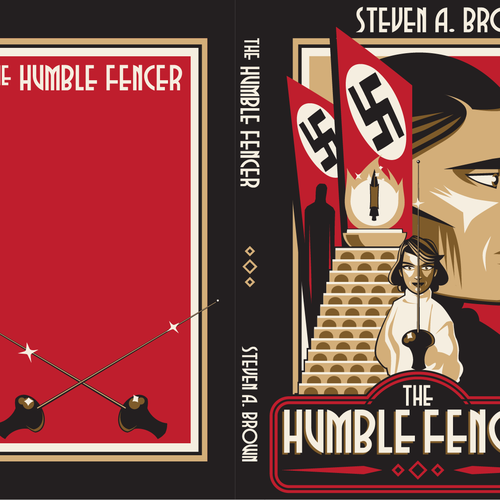 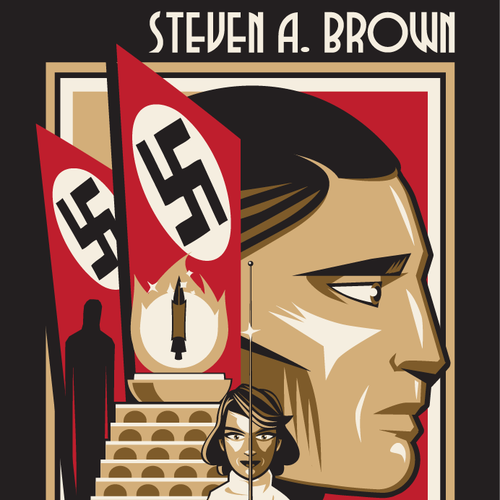 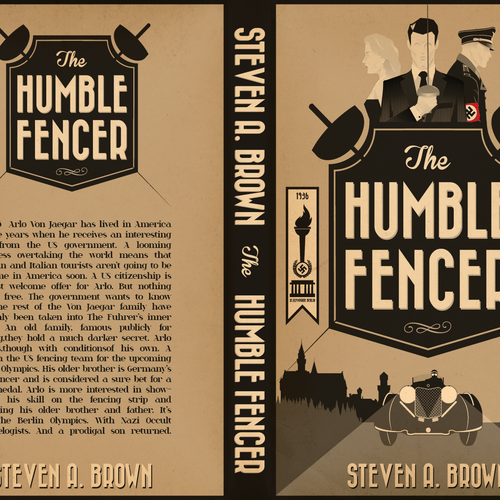 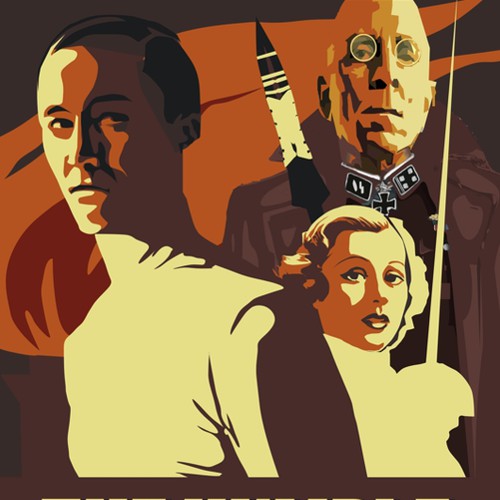 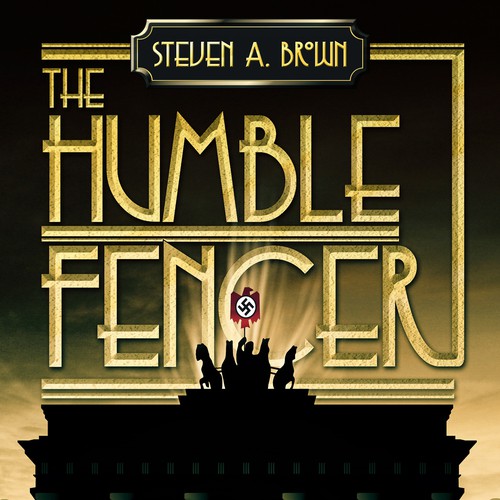 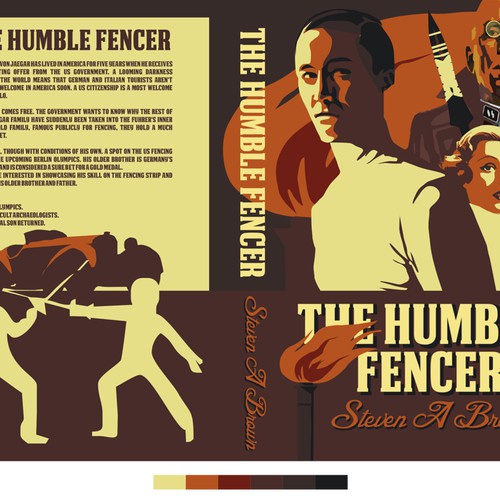 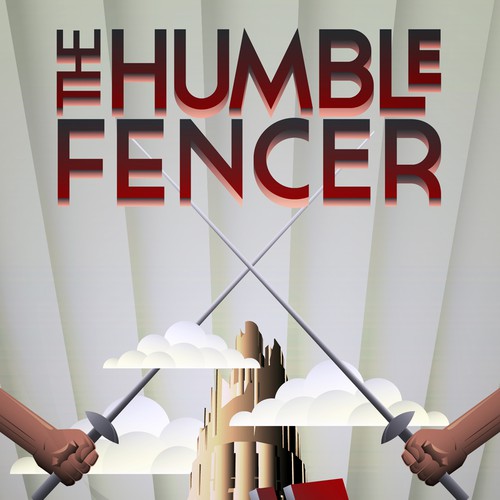 Yes, think Indiana Jones :) ....though the main character and the situations he ends up in are quite different.

I need an ebook cover which can potentially be used for the coming physical edition as well.
This includes the spine and back cover. The back cover must be mostly blank though, perhaps simply a couple of dueling fencer images or the lunging fencer to match the web banner (see next paragraph)

I would also like a matching banner that can be used as a web banner and a website header. The pictures here can be the book cover rearranged. It does not need to be unique content but you may be able to fit more in....

As per the pic provided, I'd like this to include a lunging fencer.

The Humble Fencer is an action adventure novel with a slightly comedic tone in the style of Indiana Jones, James Bond,

I am after a cover that will clue the potential reader into what sort of novel it is but without sitting too close to the traditional painted Indiana Jones covers.

I have decided that a retro art deco pop art look would be a good way to go, see my picture examples to see the sort of thing I am thinking of....and apologies if my term above makes no sense :)

I need an ebook cover which can potentially be used for the coming physical edition as well. (While I'm self published at the moment I will be shopping the finished product to publishers)

This includes the spine and back cover. The back cover must be mostly blank though (in order to fit the blurb later...) perhaps simply a couple of dueling fencer images or the lunging fencer to match the web banner (see next paragraph)

I would also like a matching banner that can be used as a web banner and a website header. The pictures here can be the book cover rearranged if that suits. It does not need to be unique but you may be able to fit more in....   the skeleton website is http://www.humblefencer.com  ...the web banner/header will be used here and on other sites to promote the upcoming book.

There are to be 3 (potentially 4) novels in the series altogether taking place over fifteen years and I'd like a style that can be replicated across the novels for consistency ....and would love to work with the same designer on subsequent ones!

In the pictures below, I have 3 favorites by a wide margin:

This is really the sort of thing I'm after....

Arlo Von Jaegar is our main character. He is extremely tall and very thin with a thin face and slicked back black hair, an aristocrat dandy.
He favors a navy pin stripe 3 piece suit with vest as his every day wear. I'd like him appearing on the cover somewhere, holding either an epee or rapier.

I've included a couple of photos of Aldo Nadi (a 1920s fencer) to give you an idea as to how Arlo Von Jaegar may look.

Helen Muntz is an attractive blonde haired female fencer and the heroine of the story. An image of a female fencer has been included to show her look.

Hans Von Jaegar is their father and is an older fatter German Indy but with a beard.

Commander Vogel is an older wiry SS agent with spectacles...think Tarkin from Star Wars with glasses....

One of the main settings is the 1936 Berlin Olympics so I'd like that to appear somehow ....though the Olympic rings are famously hard to use without getting pinged for trademark infringement, so the Olympic flame and potentially stadium are probably better options.

There are two macguffins (objects they are pursuing) in the novel.
The first is the 'spear of destiny', the spear point that pierced Jesus on the cross ...though this is the red herring of the story. The real object of desire being pursued is the Tower of Babel. I'd like them to both appear on the cover somewhere but with the spear much more prominent and the tower partially hidden, obscured somehow so its not altogether obvious.

A fencer in uniform and/or fencers dueling would also be great.

I've made many suggestions here but am not trying to set anything in stone. Not everything I've mentioned must be included, obviously the design and layout will dictate what will and won't fit!

I am also happy for you to show me that I'm entirely wrong and for you to produce a more sparse adventure cover, something thats not as crowded .....though I'd like to get some sort of Arlo Von Jaegar appearance on there somewhere....even if its a shadow, a part of etc....

or perhaps a new type of 'adventure cover'  that doesn't look anything like an Indiana Jones or James Bond look ....go nuts :)

By 1936 Arlo Von Jaegar has lived in America for five years when he receives an interesting offer from the US government. A looming darkness overtaking the world means that German and Italian tourists aren't going to be welcome in America soon. A US citizenship is a most welcome offer for Arlo.

But nothing comes free. The government wants to know why the rest of the Von Jaegar family have suddenly been taken into The Fuhrer's inner circle. An old family, famous publicly for fencing, they hold a much darker secret.

Arlo agrees, though with conditions of his own. A spot on the US fencing team for the upcoming Berlin Olympics. His older brother is Germany's best fencer and is considered a sure bet for a gold medal.
Arlo is more interested in showcasing his skill on the fencing strip and upstaging his older brother and father.

It's 1936.
The Berlin Olympics.
With Nazi Occult Archaeologists.
And a prodigal son returned.
***

This is the first in a 3-4 book series and I'd love to work with the winner ongoing on the further book covers for a consistent overall design!