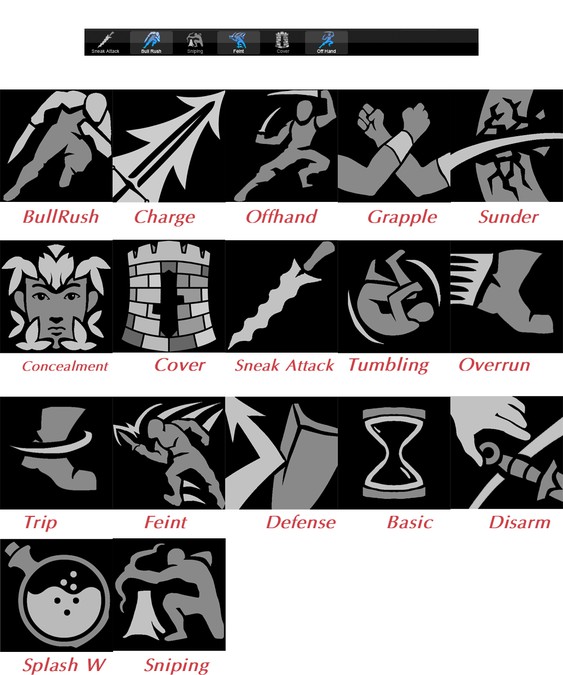 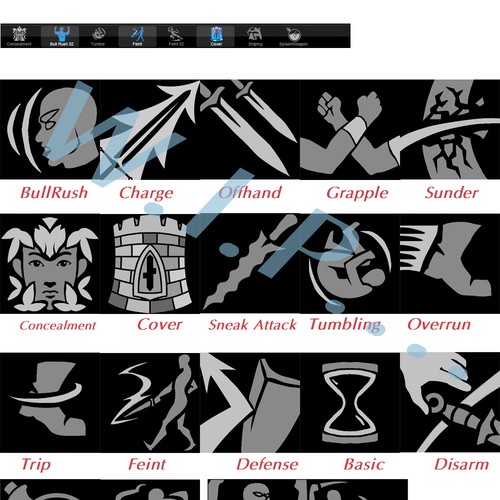 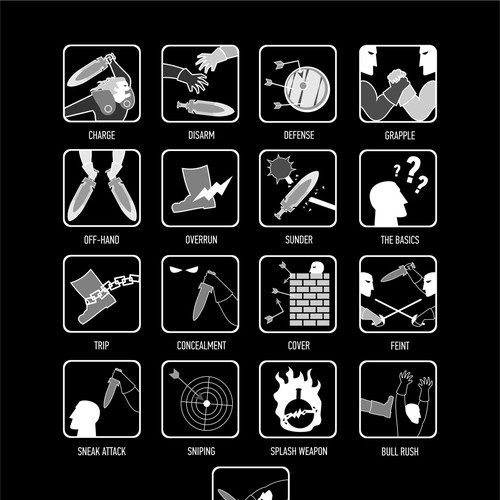 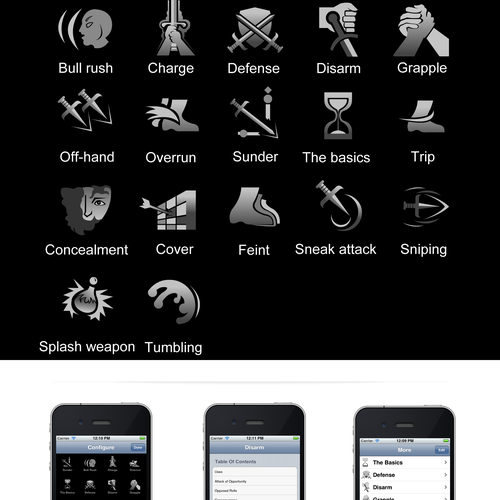 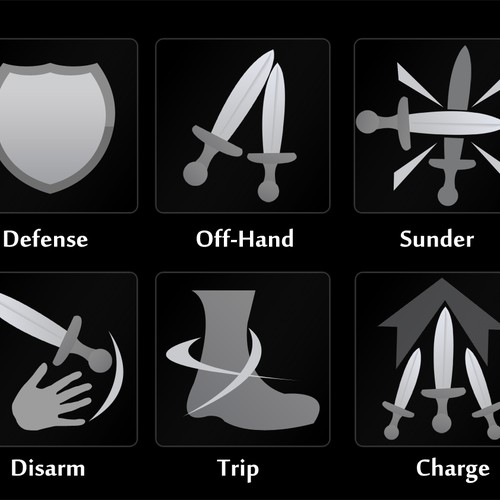 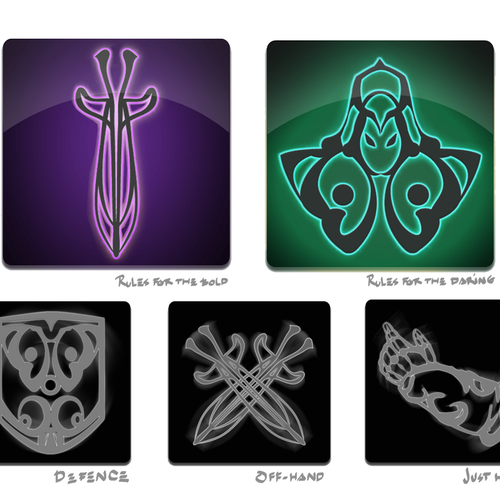 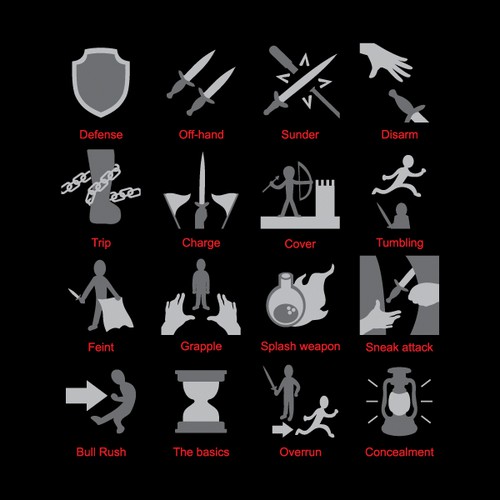 I develop a range of iPhone apps in a range of different fields. This particular project is to provide a quick reference to a carefully selected subset of the rules for Dungeons & Dragons 3.5 which were released under an open license.

I'm looking for tab bar icon buttons for two iPhone apps, "Rules for the bold" and "Rules for the daring". These apps contain a carefully selected subset of rules for Dungeons & Dragons 3.5 (published by Wizards of the Coast). These apps are intended to be used as a quick reference while playing the game to avoid slowing down the pace of the game.

iPhone tab bar icons don't use colour. They use the transparency set on the pixels and convert complete transparency to black and complete opacity to white with the various partial opacities converted to various greys.

The grey on black is programmatically reversed for the "More screen".

Please don't use any plays on words for the icons as I intend to distribute the app in multiple languages.

Icons for these apps should have either dramatic or stark imagery - not cute or funny.

Please: no blood or weapons embedded in people - I'm aiming for a feeling of drama not gritty realism.

The setting for Dungeons and Dragons is medieval high fantasy and icons that are not out of period will be preferred. Attached, images of archetypical fighter and rogue - these images do not belong to me - they belong to Paizo - another company associated with Dungeons & Dragons.

A list of the buttons and some suggestions for images is given below. Please do feel free to substitute your own suggestions - especially if you can fit them all into a theme. You may find the following web page useful if you are unfamiliar with any of the terms http://www.d20srd.org/srd/combat/sp…ttacks.htm

Charge - a recklessly closes distance with the opponent (a sword held high? a pennant? a bugle?)

Defense - reduces your chance of being hurt (a shield? a parried sword?)

Disarm - causes your opponent to drop their weapon (a sword being dropped from an open hand? perhaps just showing hand and hilt?)

Grapple - wrestling with your opponent (two hands grasped for an arm-wrestle? an arm twisted behind a back?)

Off-hand - one man using two weapons (a pair of crossed daggers hilts at the same side?)

Overrun - shoving your way past an opponent

Sunder - attempting to break a weapon (a sword breaking a staff?)

The basics - explains a few terms needed to understand the rest of the rules, tells you what you can do in a few seconds (an hour glass?)

Trip - causing your opponent to fall (chain from a fail around a leg?)

Concealment - darkness, shadow, mist and the benefits of attacking from them (a held lantern?)

Cover - the benefits of fighting from around obstacles (an arrow slit as in a castle wall? an archer peaking round a wall? somebody ducking behind a low wall as a spell impacts upon it?)

Feint - wrong-footing your opponent so that they are off-balance for the next blow (matador's cape? a successfully parried rapier and an unnoticed dagger?)

Sneak attack - a devastating attack that can only be performed if the opponent hasn't spotted you (a person oblivious to a hooded figure that stalks them? a dagger dropping from a concealed sheath in a sleeve?)

Sniping - a ranged attack from darkness or cover (a thrown dagger?)

Tumbling - using acrobatics/athletics to move past an opponent (someone vaulting?)

The vast bulk of the rules for Dungeons & Dragons 3.5 ( http://en.wikipedia.org/wiki/Editio ) was published under an open license; a bold commercial move that seemed to be very successful in increasing their market share.

Unicorn app icon for a internet radio streaming app
179 €
Consulting, App development, Open Source
66
entries
17
diseñadores
Card Spot App
US$199
an app providing a list of multiple news feeds providing content that relates to the sports card market. Target audience
119
entries
9
diseñadores
iOS app icon for attendance tracking app
US$ 199
Present is an attendance tracker. Currently what we have is an iOS app that allows teachers, instructors, organizers and
67
entries
21
diseñadores
Looking for 31 attractive icons for our Swiss travel website
450 €
MySwissAlps.com offers help to people from all over the world, who consider visiting Switzerland for their holidays.
86
entries
16
designer
Creative Icon set for Bay Area Video Production Company
$ 599
We are a full service creative video agency. We help some of the world’s most innovative brands launch products, excite
31
entries
18
Designer
Icon set for a realtime feedback app
199 US$
We need 5 icons developed for our app called “Ally Assist”, a realtime feedback app for targeted behavior change and res
53
entries
21
designers

Start nu je wedstrijd
Fun iOS app icon with a cute animal theme
US$199
Cellaroo makes it easy to manage your wine collection! If you own more than a handful of bottles of wine and want to kee
47
entries
16
diseñadores
LOVE OF MONEY ICON / EMBLEM
299 US$
Hip Hop music video about a club for Superheros who love sex and money.
180
entries
17
diseñadores
TaxSupport.com - Icons
US$ 318
Accounting and Software Company * Audience: people who wanT their taxes prepared online (cloud) * We trying to update
109
entries
18
designers
Premium Favicon for AI Startup
199 $
Accern is an artificial intelligence startup. We help organizations become more efficient by using machine-learning to a
73
entries
23
Designer
We need a creative designer to design a Discount and Delivery App Icon
US$299
We are a discount and food delivery app. Our brand values include community, entertainment, and saving. Mostly focused o
127
entries
19
diseñadores
Design an Online Course Cover
$ 659
I produce online videos teaching people how to code. My website is http://www.codewithmosh.com
150
entries
27
Designer
Kom meer te weten over pictogram of knop ontwerpen
Bekijk hoe het werkt