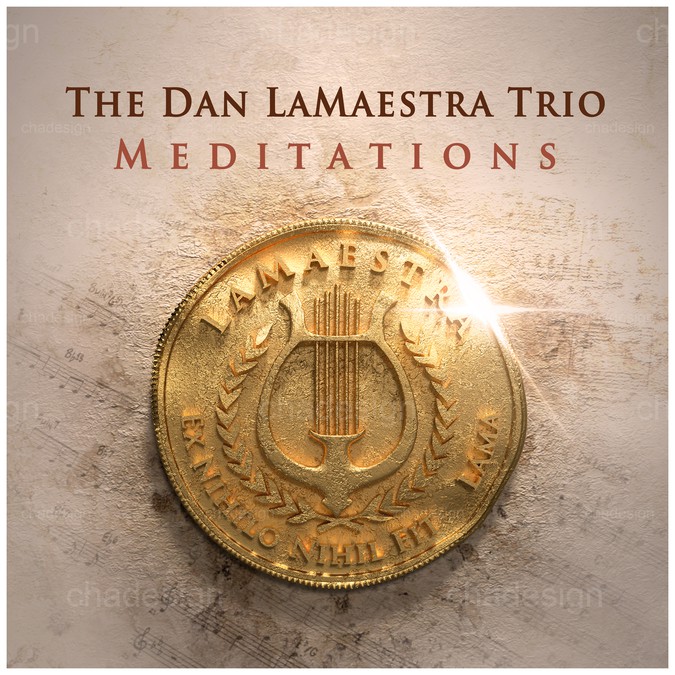 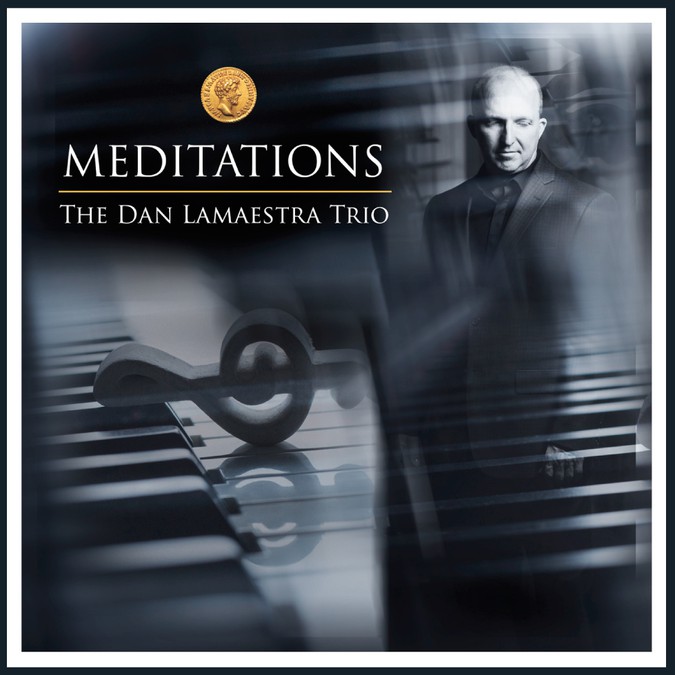 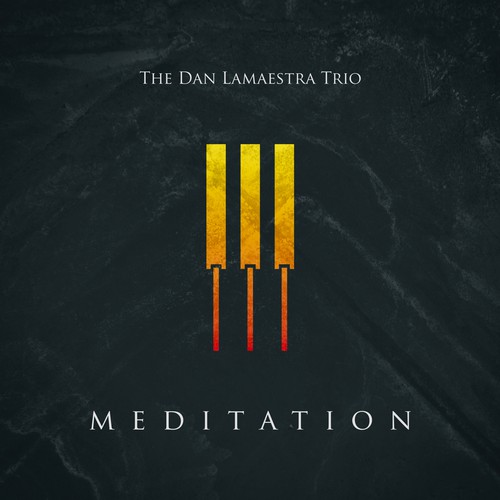 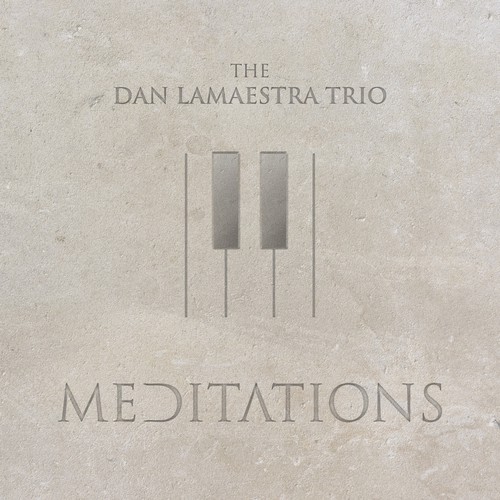 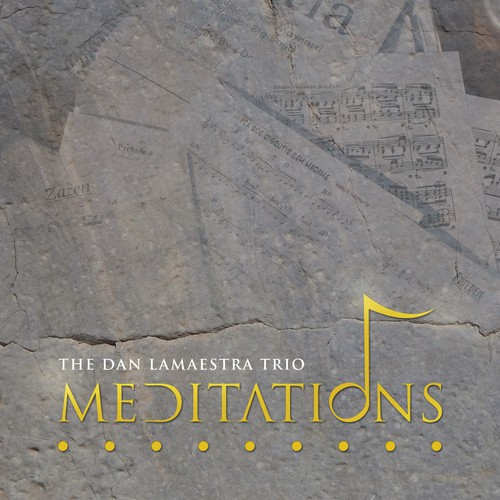 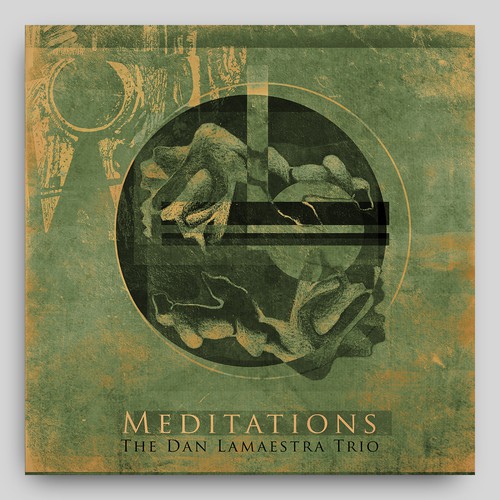 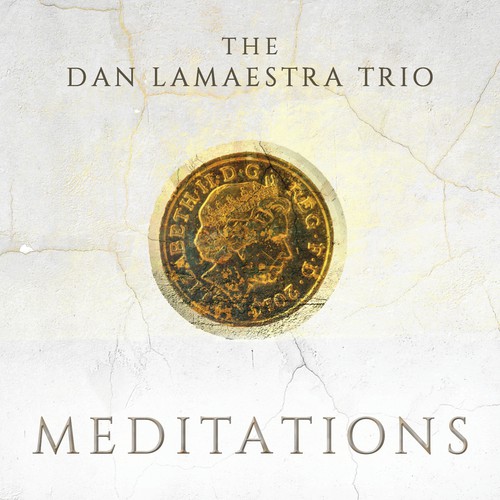 Cover text should include:
The Dan LaMaestra Trio

NOTES TO DESIGNER:
The music is jazz with an edge, classic jazz and elements of modern styles....virtuoso jazz piano. NOT smooth jazz or jazz for your grandparents:) But even they might like some of it!

I like roman coins, image of a coin...or something similar and compelling to the eye. "Meditations" is also the title of a famous book by stoic philosopher Marcus Aurelius, and many covers through the years of that book feature a coin, or a symbol of some sort like that. Would be worth checking some out on a search engine...

I like the "Trajan" typeface, and if possible...a version of that typeface that has missing lines in the letters....so it's like a modern "nod" to the classic roman look....this missing lines thing is very important...creativity with this could make it all come together for me.

I like the idea of a stone like background maybe....cracked stone? Background....not too obvious or distracting....but if that distracts from the images and text....then I could do without.

Photos:
Not sure about using pictures on the cover....I prefer those to be "inside" the eventual printed ecojacket and on the website.

But I will send just so you have some. If you wish to hear some of my other music, there is some at http://www.danlamaestra.com

Covers I like: Most by Windham Hill records, Enja Records....joe henderson "double rainbow", other verve records release from the 1990-2005 era. They were on to something. I swear the cover art helped me experience the music in a special way!!!

I love the art of kandinsky, abstract stuff, and one of my fave paintings is "The Fighting Temeraire" By W Turner....

Finally....I am a HUGE fan of the idea of 90 percent simple design...with ten percent of the design somehow being eye catching and interesting

Like a white cover with basic text...and then a super detailed drawing of something in the corner or top or bottom or whatever....less is more.

Text on a curve and playing with letters and lines can be cool.

I want to submit this monday or tuesday. I have the music ready to go, just need the cover image I can be happy with.

Music track cover artwork
EUR 309
Radical Resonance is a small music production company we just kicked-off. We love music and try to create always some...
65
entries
20
designers
Looking for animated Graphics for In-Production documentary
USD 349
Video Documentaries.
26
entries
9
designers
Design an LP cover that looks like a movie poster.
US$ 549
We make music with a psychedelic bent while maintaining pop structures. Audience: open-minded, experimental people.
28
entries
13
diseñadores
Design an emotional scene for my Debut Album Cover! Chonna Cristelle
US$349
Hi, I'm Chonna and I'm a Performing Artist. My style of music is Indie Soul, Rock n Roll. My writing is on the darker,
300
entries
56
designers
Valhalla - A Nordic Rock Opera (viking rock album cover)
$349
Books, music, video
103
entries
25
designers
Create an Illustrated Map to be included in a Book about North Korea / Pyongyang
$500
We are a full-service literary agency in NYC established in 1989. This project is for a nonfiction title about North Ko
18
entries
6
designers

Start nu je wedstrijd
99social: colourful, modern poster for our annual mid-year event!
AU$ 449
We are the 99designs SocialClub team from Melbourne and we need your amazing skills to help us create a poster for our a
151
entries
67
designers
Cover art for new podcast
$349
We are a vegan podcast that targets the vegan community.
85
entries
33
designers
Podcast Cover Art - Blow My Mind One Design at a Time (Ok that was Cheesy)
$349
The Franchise Story Podcast is an interview style podcast where we interview franchisees (guy that owns the McDonalds) a
25
entries
14
designers
Design a BEAUTIFUL COVER for my NEXT ALBUM
USD 750
I am an international classical concert pianist now releasing my second solo album - IN THE SILENT NIGHT: Works by Rachm
181
entries
39
designers
Create a portrait illustration of a mafia man
US$349
Nicotin Pads, audience 18-35
46
entries
32
designers
Creative Album Cover for Catchy Female Rock Band
USD 349
An energetic, accessible, and atmospheric rock band reminiscent of Silversun Pickups, Paramore, and Foo Fighters. Both m
65
entries
30
designers
Kom meer te weten over illustratie of graphics ontwerpen
Bekijk hoe het werkt