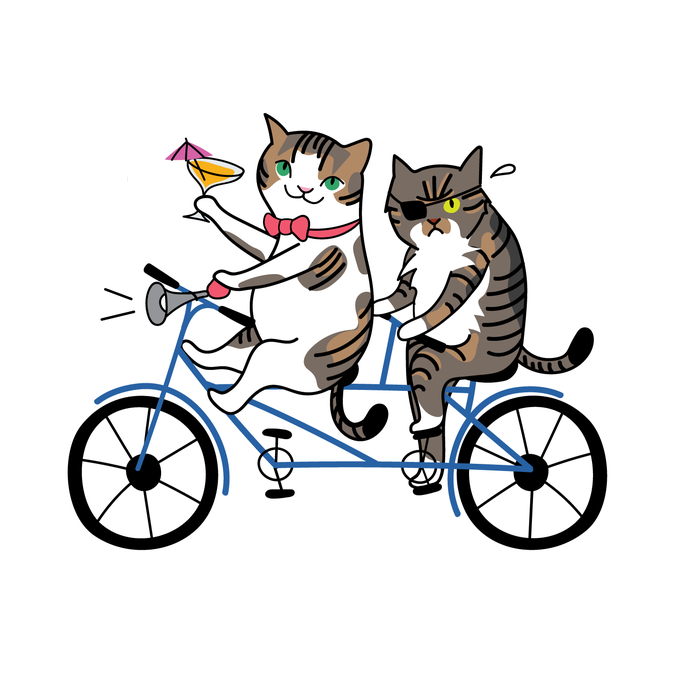 Illustration for Cats of Hickford Street 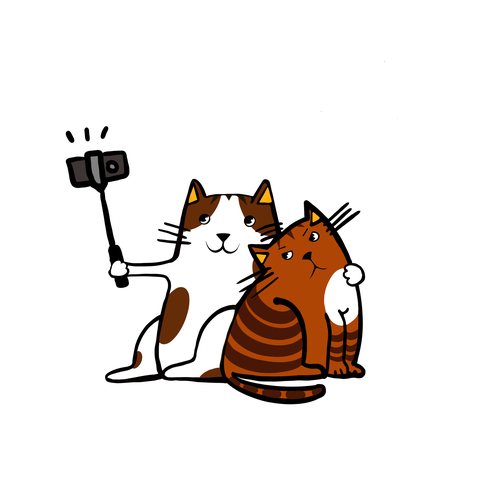 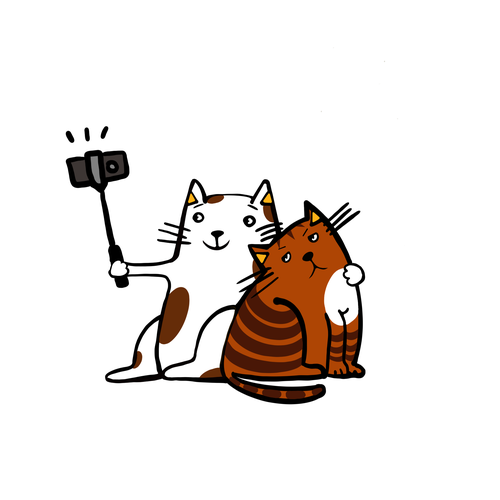 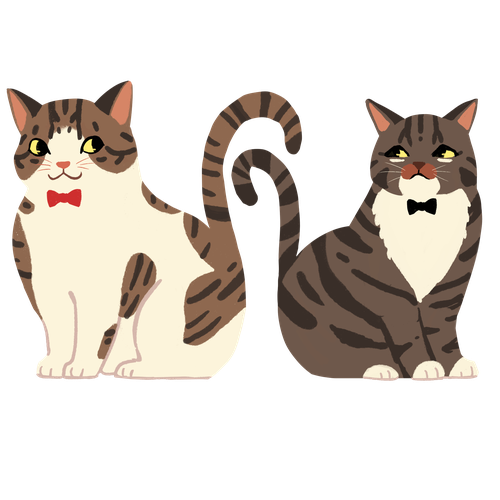 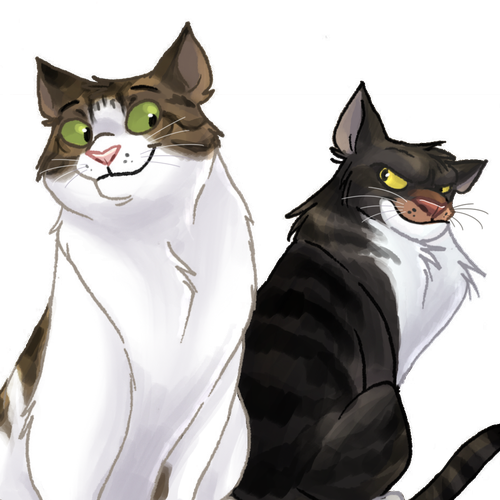 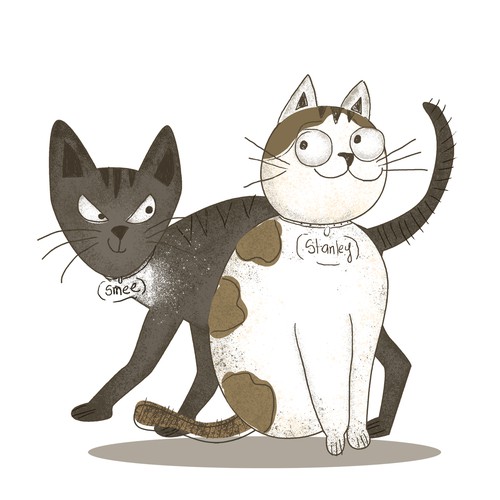 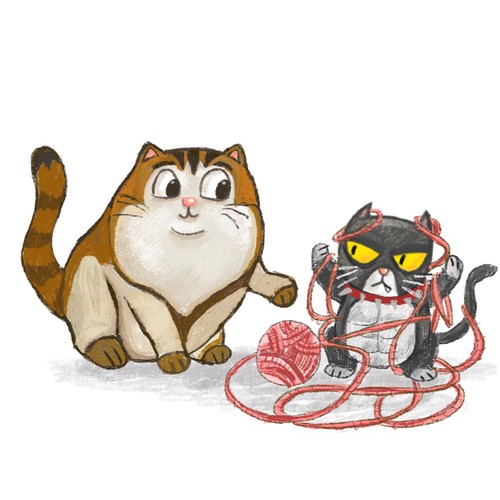 We're a small community of neighbours who run an instagram page to share photos and stories of our cats in the street!

We would like a fun illustration characterising two of the cats in our street who are the most well-known by residents.

The illustration will be used on our instagram page and we will also digital print it onto some white tea-towels to gift to our neighbours.

The first cat (Stanley) is a huge white male tabby with brown splotches who is very friendly and knows he's the boss of the street. The other cat (Smee) is a dark brown, smaller but muscular male cat with a mischievous personality and although friendly sometimes likes to bite you and can't be trusted.

The two cats have different names depending on who you ask, and residents often make up their own names for cats that they meet. For this reason we won't use their names on the illustration (ie name tag on their collar).

To assist with imagining their characters, here's a bit more info on their personalities:

Stanley:
- The good guy! He's the hero!
- Usually not wearing a collar
- Likes to roll in the dust
- Big and heavy (slightly overweight belly)
- Very friendly and approachable
- Getting older and needs to defend his territory
- The boss of the street
- if in a jazz band would be lead singer in a tuxedo
- Outwits his opponents
- An action hero late in his career like Bruce Willis.

Smee:
- The bad guy! Can't be trusted.
- Lurks in the shadows and somewhat an evil cat
- Is scared of Stanley
- Fast and agile
- His body is short and stocky and he looks like a bodybuilder
- Easily frustrated and bites people
- If in a jazz band would play drums or be backing deep voice vocals :)
- The goon for hire / not too smart.
- All brawn no brain
- He would be Snape in Harry Potter

We imagine the illustration could be the two cats hanging out together with one of them looking friendly (Stanley) and the other a bit more shifty looking (Smee). The general vibe is a sort of hero vs villain, dark vs light kind of thing but we're happy to let you be creative about this. They could be playing instruments, on an adventure together, sizing each other up for a fight, having dinner together, doing a science experiment together, cooking together or doing any kind of fun activity.

We're thinking the illustration should include the full body of both cats so that its possible to tell which cat they are representing (by colouring, size, shape, patches, stripes on fur etc).

We're open to different styles of illustration, and imagine something thats more of a caricature or cartoon, rather than seeking realism. See attached references on some possible styles.

See reference photos of both cats for more details on their appearance.

Illustration to be provided on a transparent background so we can also print on to tea-towels in addition to instagram page.

Simple but impactful - Core values poster for Veterinary Hospital
US$349
We provide affordable surgical solutions for pets.
48
entries
18
diseñadores
Armenian Mouflon Project Logo design
US$ 299
Its a wildlife protection organization that is targeting environmentalists and wildlife conservancy audience in order to
116
entries
30
diseñadores
Logo Design for our Pet-Nutrition-Shop Annimally
€ 269
We sell products (nutritions, supplements) for pets (dogs, cats, horses, reptiles, rabbits and other animals) on Amazon
73
entries
26
Designer
Stong guy, tiny dog
CHF 359
We are a mother and daughter startup offering handmade sweaters for greyhounds made from used cashmere sweaters.
64
entries
23
Designer
Custom made dog leashes out of dock lines called “Dock Dawg”
US$349
The product is custom dog leashes and collars. They are made out of bare spectra rope. The will vary from four to eight
96
entries
22
diseñadores
Need A illustration or a graphic digital art design!
349 US$
We sell organic soap and other industrial goods like apparel.
14
entries
10
designers

Start nu je wedstrijd
Draw me some cute animals for my travel blog :)
US$ 299
A travel blog featuring and benefitting animals
105
entries
24
designers
Pet Aid & Wellness Center catering to those who identify as "pet parents".
USD 299
We offer a holistic pet wellness program that includes top-tier veterinary care, behavioral training, education for pet
117
entries
21
designer
Bird is the Word! This project should be a fun one for a change! Thank you!
299 $
Families all over the world love to watch birds in their own backyards. The recreational joy of bird watching and feedin
110
entries
43
Designer
Need an amazing Snake Company Logo!
899 USD
Breeder of high end ball python snakes.
138
entries
44
designer
We need a stunning logo designed for our business
$349
We inspect, evaluate and repair asphalt/pavement
31
entries
9
デザイナー数
Pet hotel logo
$299
Dog and Cat Boarding
117
entries
46
デザイナー数
Kom meer te weten over illustratie of graphics ontwerpen
Bekijk hoe het werkt