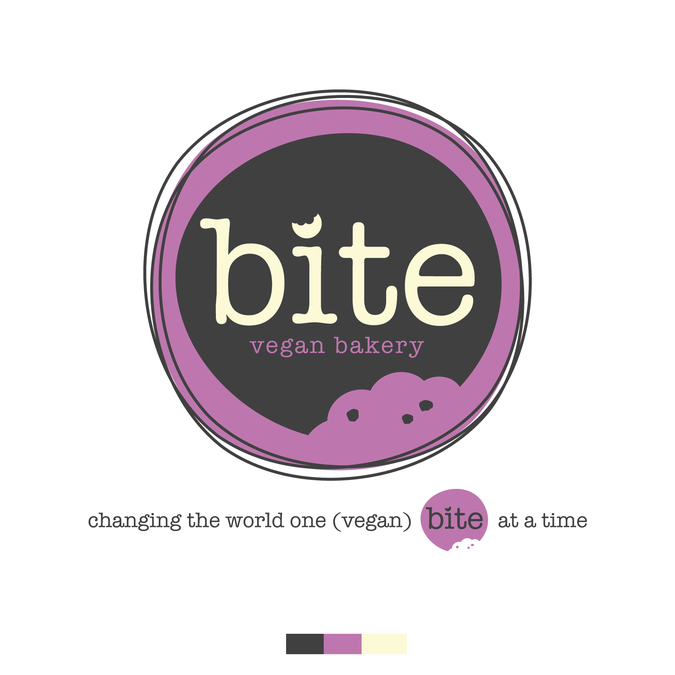 Help Bite with a new logo 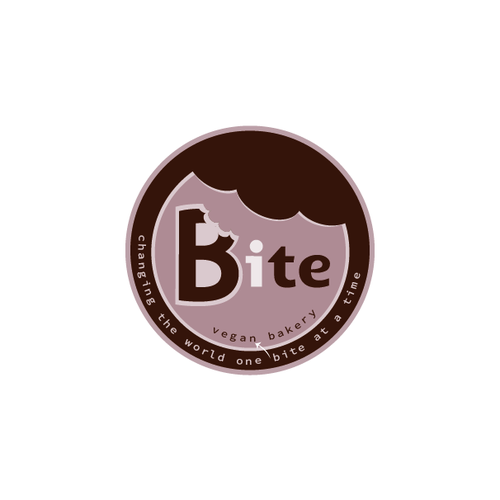 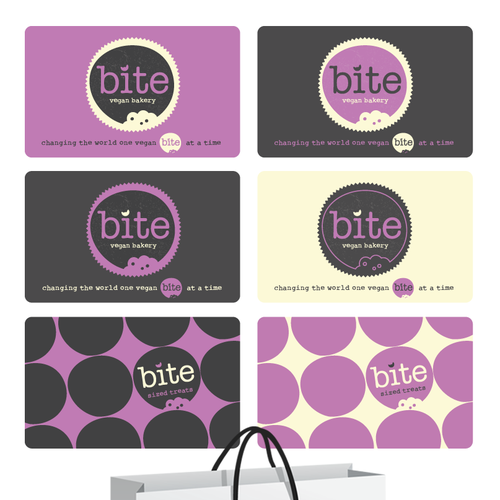 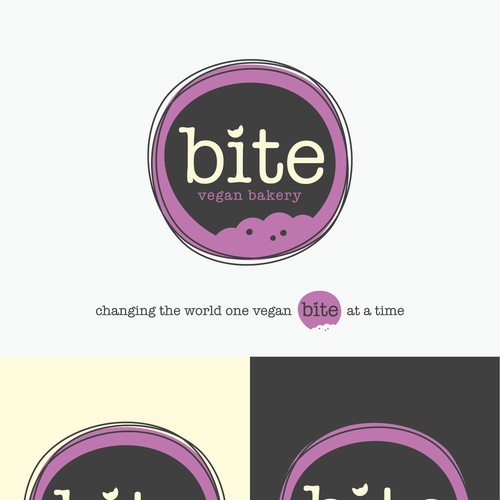 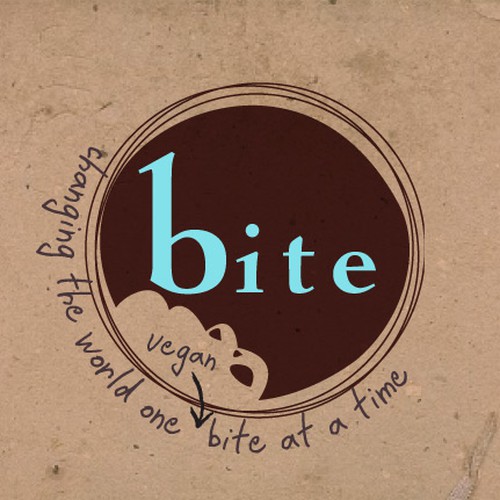 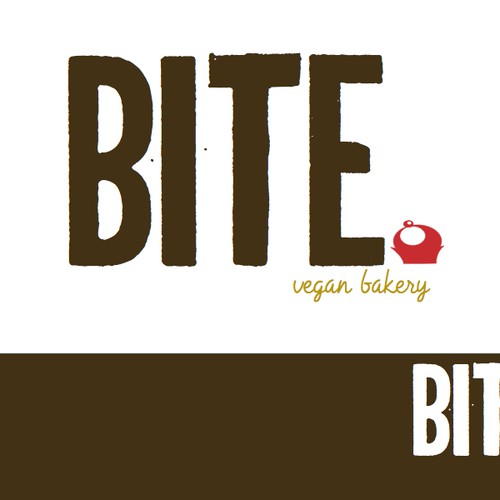 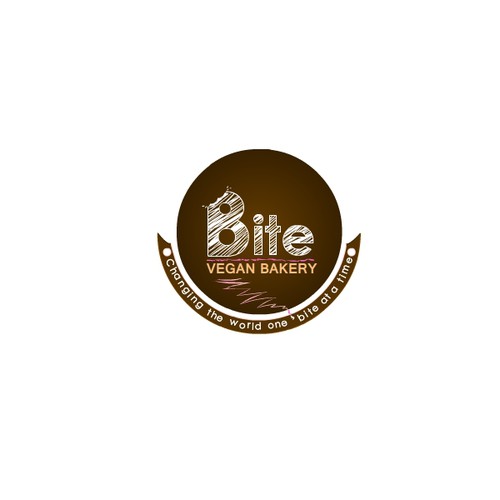 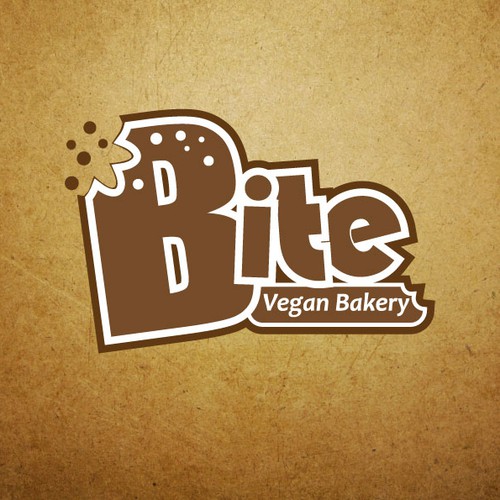 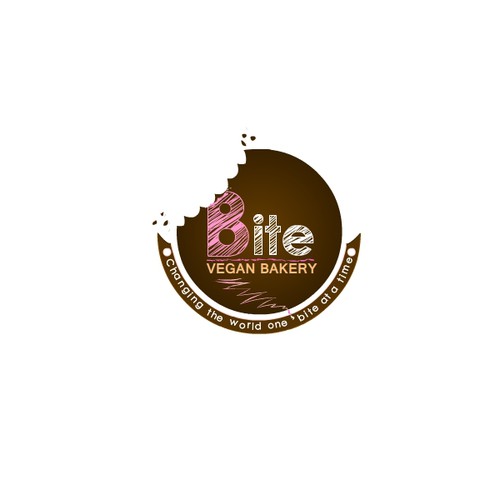 Bite is a vegan bakery that specializes in mini, bite-sized treats. We sell at local farmers' markets, and we try to attract both vegans and non-vegans alike, of all ages. We want to make eating vegan food trendy and appealing to everyone.

My original idea for the design was a big, bold B with a bite taken out of the top left corner, and then a smaller "ite" (to emphasize the bite-sized theme).  I am undecided about adding "Vegan Bakery" to the logo, or just sticking with Bite.  Both options would be greatly appreciated!

I want it to be cool and edgy, or even a little bit quirky (maybe a chalkboard or cardboard sort of thing). It is important to me that it's on the trendy side - I want people to really buy into the vibe of the company and change their opinions about veganism being too "hippy-ish."

I don't like cutesy or girly, as many bakeries tend to go. Brown and pink seem to be popular colors, but unless it's done in an original way, I'd rather stay away from that (even though there must be a reason so many bakeries go with that).

Our slogan is "Changing the world one (vegan) bite at a time" (with the word vegan above or below with an arrow ^). If there is an amazing way to have it with the logo, go for it! But if not, the name is really the most important thing.

We also don't just make cupcakes, so unless a cupcake is used in a subtle way, I don't want it to look just like a cupcake company.

I included some examples of logos I just threw together on photoshop.  They aren't quite right, but if someone can make one of them amazing, that could be good :-)  I also included an image of a cupcake company's packaging whose vibe I really like in case that helps too!  What I like about them is the sketchy/chalkboard-ish type words/pictures they use.

Thanks so much in advance. I can't wait to work with all of you!

Boxing Themed Food Truck Promoter Logo
US$299
This logo will be used for a Food Truck promoting business. Target audience is the general public.
25
entries
6
designers
Design logo for Truly D’Lish that specializes in Ukrainian Food
CAD 389
Ukrainian food...
35
entries
12
diseñadores
phoenix
US$ 299
We will sell icecream and other food products to shops
172
entries
28
diseñadores
Shaved Ice Trailer Island Party!
499 USD
We are a shaved ice business with an island theme, now teaching others our concept.
37
entries
20
designer
Refreshing the brand for Sottinis Sandwich cafe
US$499
We are a modern sandwich cafe. we use the best ingredients to deliver the best sandwiches in a great atmosphere where...
200
entries
69
designers
dessert junkie-a logo that symbolizes the love/addiction of dessert
US$ 799
Dessert Junkie is a neighborhood dessert and coffee café. The menu is dessert centric, yet not dessert exclusive and...
143
entries
43
designers

Start nu je wedstrijd
"Design a rustic logo for a new brewery"
799 US$
We are a brewery with a tasting room with a beautiful outdoor beer garden. The feel is a rustic river lodge on the Housa
104
entries
33
diseñadores
Make Bar Toast the go-to resource for bartenders
299 US$
Bar Toast is an instructional blog for beginning and experienced bartenders alike. It has an approachable and light voic
107
entries
15
diseñadores
24 Royale Logo and Bottle design
£ 420
24 Royale is a signature edition alcoholic beverage. 24 Royale is a smooth rum with a fresh blend of lime.
109
entries
36
designers
Christian Logo for Coffee Company
$ 299
We are a Christian Coffee Company called "The Bible Coffee," that donates a Bible for every bag of coffee purchased. ...
122
entries
23
Designer
Cosy, neighborhood, Italian pasta joint seeks inviting logo.
US$ 299
Italian Restaurant in a neighborhood. Rustic interior with wood paneling and metal chairs. The menu will include fresh a
66
entries
24
diseñadores
Colorado Winery/Vineyard Logo
US$299
Winery and vineyard in Palisade CO. We make wine from Colorado grapes. Target audience is wine lovers of all ages.
50
entries
14
designers