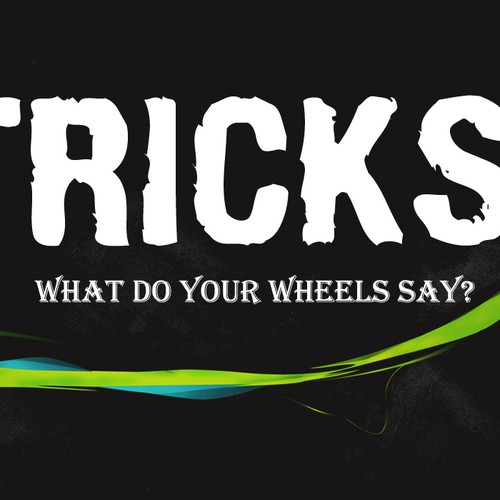 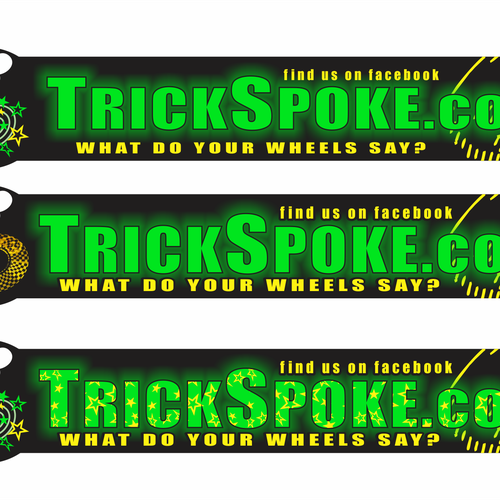 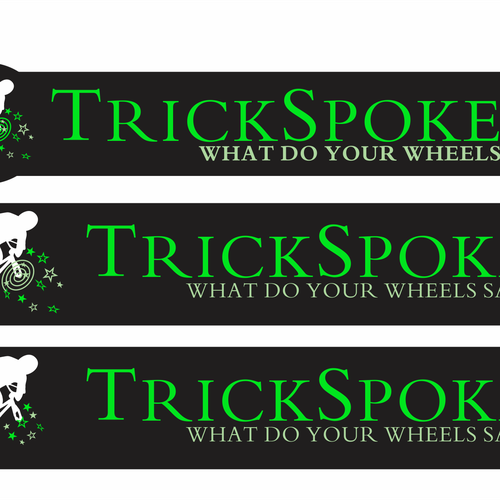 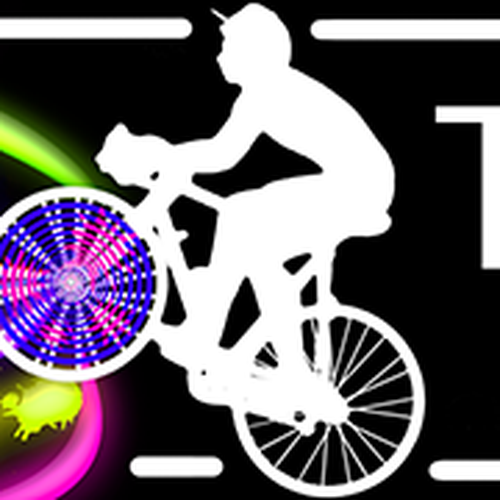 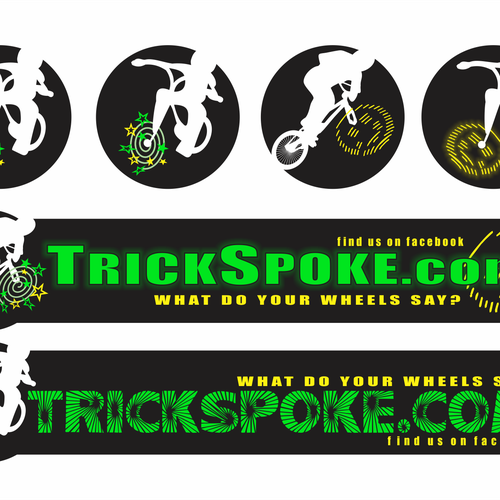 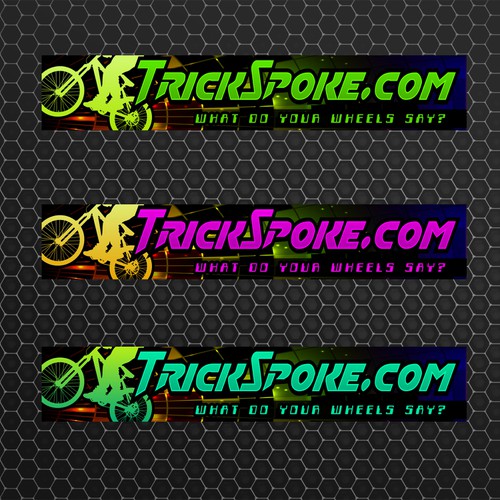 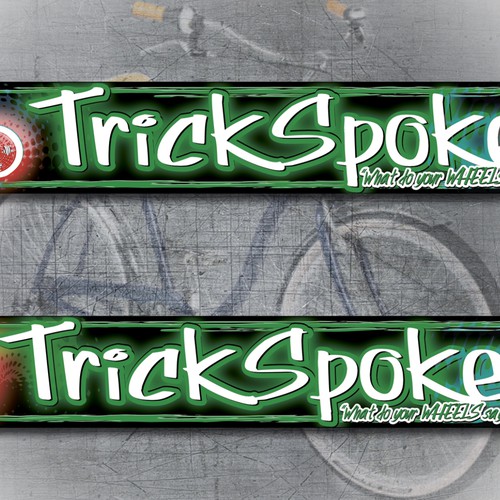 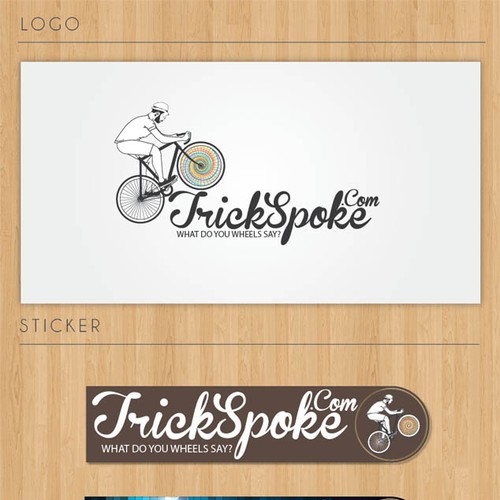 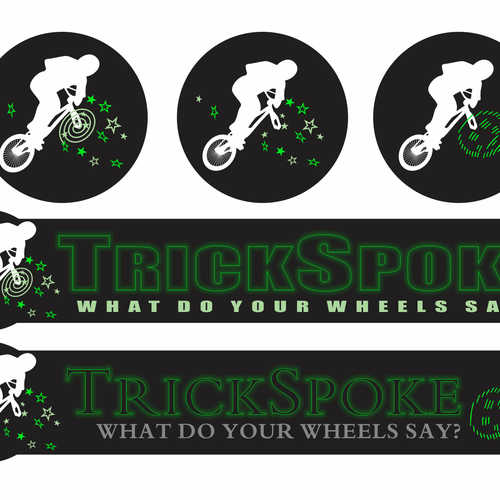 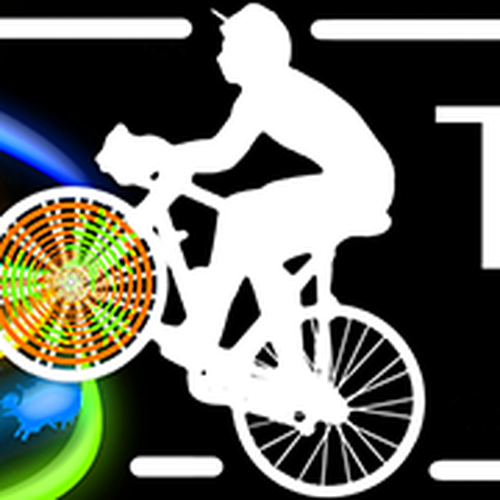 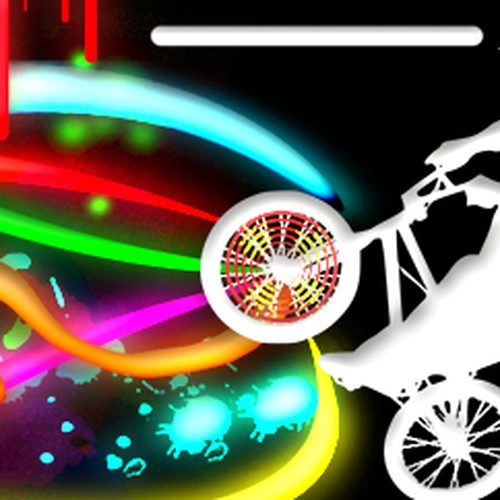 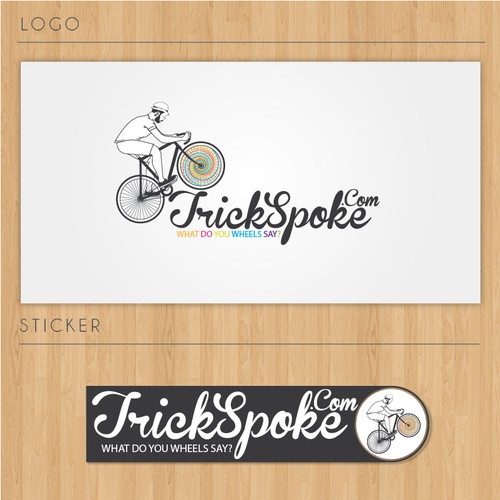 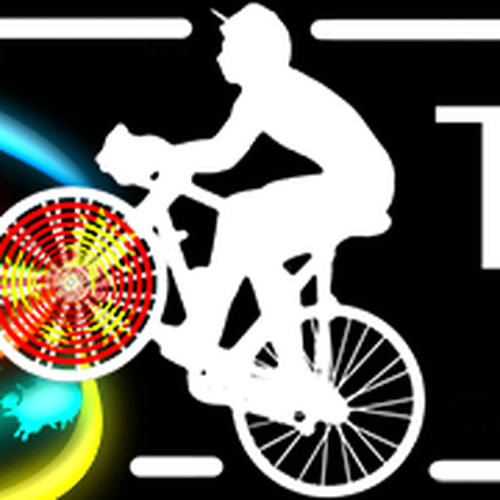 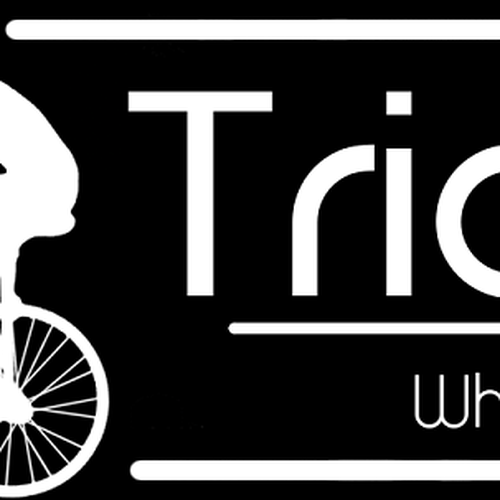 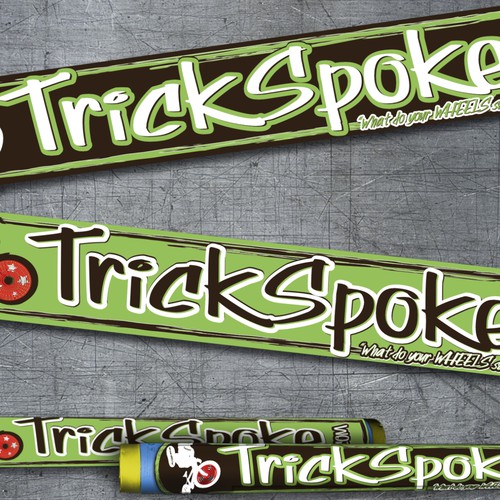 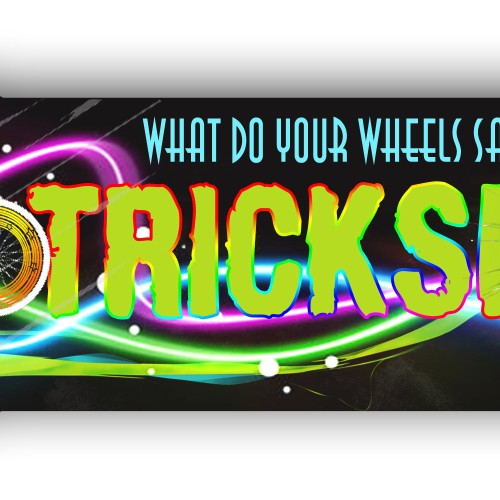 I'm developing a device (called a TrickSpoke) that attaches to a bicycle spoke. The lights on the TrickSpoke  create a picture as the wheel rotates.
Each user can load their own artwork onto the device, to display personalized artwork. Each TrickSpoke can display hundreds of unique images.

I need a sticker for the device that has a catchy logo and says "TrickSpoke.com".
The sticker will be on a round tube, and should have dimensions of  3.75" long X 0.7" tall.  If extra space is needed, the max dimensions could be stretched to 4.25" long X 0.75" tall

Sticker should be readable from a distance in low light, it should be obvious that trickspoke.com is a website where people can buy one of these lights, and should appeal to the mustached guy in the attached file "target.jpg"

I have a Logo that I've been playing around with, but it's just an idea, so don't feel obligated to stick with it.   I was trying to have a rider doing a wheelie, with a front tire made of light (or a TrickSpoke design).   One version uses a mountain/BMX bike and the other uses a cruiser.  With both, I don't like the way the rider looks -- kind of amateur (because I am, technically. That's where 99 Designs comes in).

I've attached a few example photos of an actual TrickSpoke in action during testing.

Visit facebook.com/trickspoke or trickspoke.com to see what I've got going on.

Also, consider also the phrase "What do your WHEELS say" as a subtitle.

I have uploaded an image of the device (called Trickspoke assembly.jpg). The sticker will go on the battery case.  I'm planning on printing the same graphic 2 times, so it shows up on each side.  The diameter of the battery case is 0.5", so that's why I want the graphic to be about 0.7" tall.

Start nu je wedstrijd
Design a T-Shirt for Shady Ladies
299 US$
We bring emerging women authors to Detroit and pair them with women chefs and bartenders for dinner parties in unforgett
112
entries
35
designers
Merchandise Design for the Carolina Country Music Festival
$299
Carolina Country Music Fest (CCMF) is an outdoor country music festival that takes place in June of each year in Myrtle
41
entries
22
diseñadores
A fun/friendly face/emoji to make personal panic alarm a nice accessory to carry.
US$ 199
We sell cool and elegant consumer electronics that promote safety.
30
entries
14
designers
First ever of it's kind! A music marketplace and panel in Austin, TX needs a little graphic lovin'
199 USD
The mission of the Music Marketplace is to gather the artisans and vendors from the many layers of music production, cel
70
entries
29
designer
Outdoor Adventure Cap Designs
199 US$
We sell outdoor equipment and products online. Our main sport categories are Surf, Mountain Bike, and Camping. We are wa
156
entries
28
designers
Bitcoin Men’s Underwear contest: and more
$199
Nice to meet you, I am Alex from New York. Founder of CryptoBarket- an online store that sells cryptocurrency (think Bit
84
entries
11
designers
Kom meer te weten over merchandise ontwerpen
Bekijk hoe het werkt