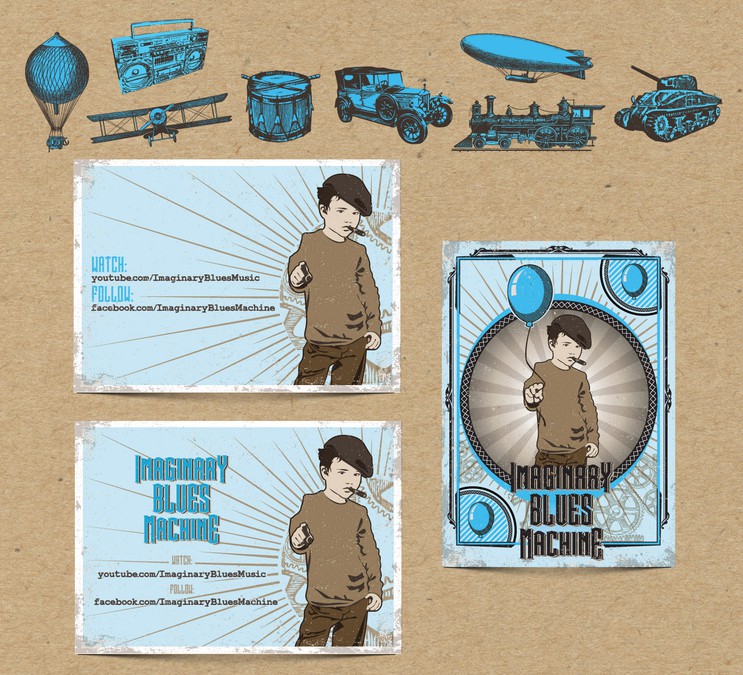 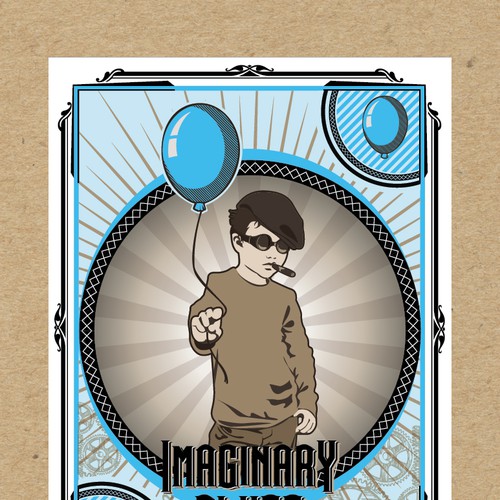 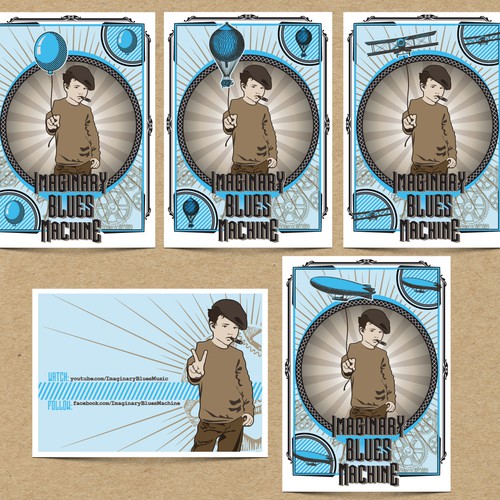 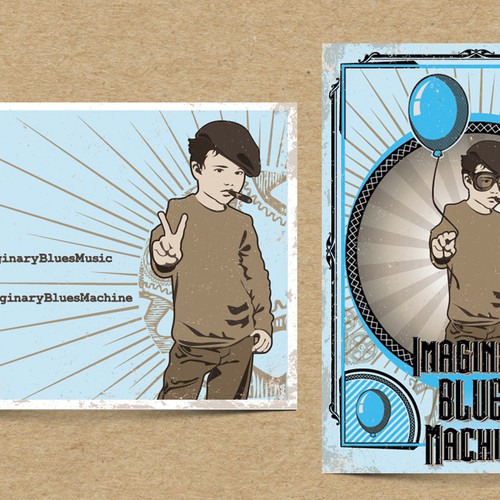 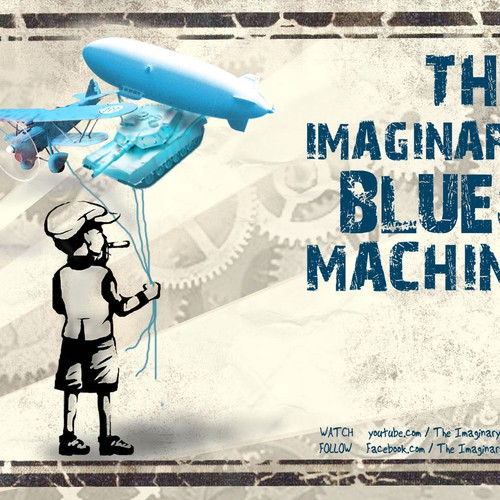 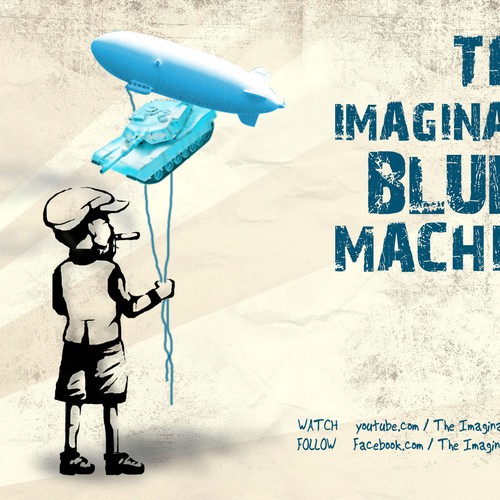 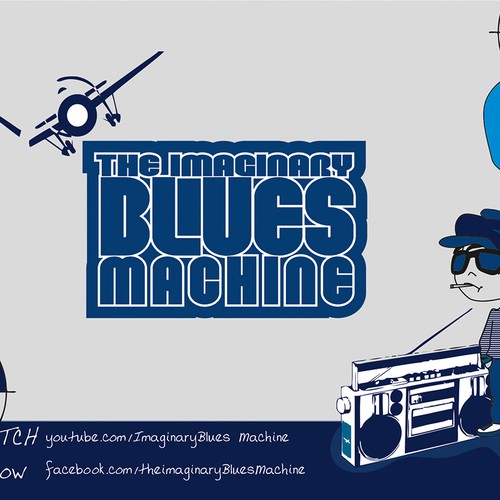 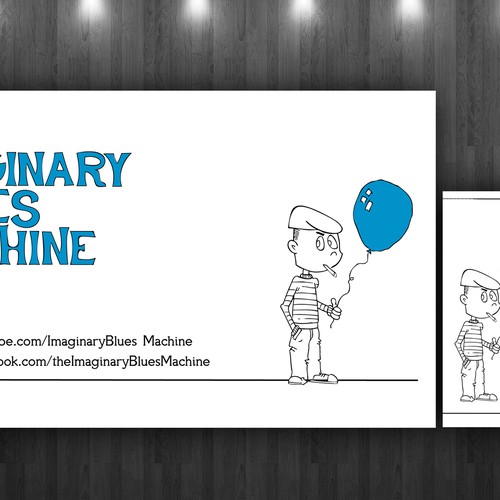 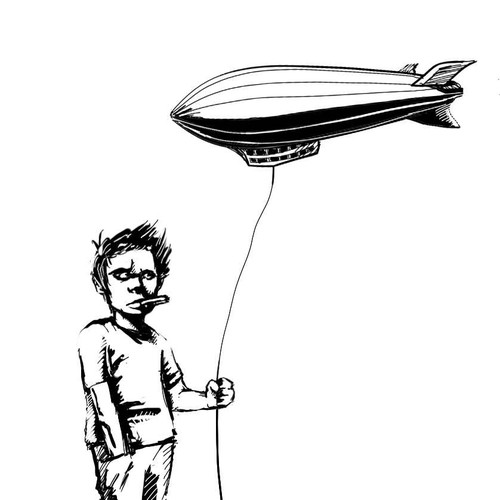 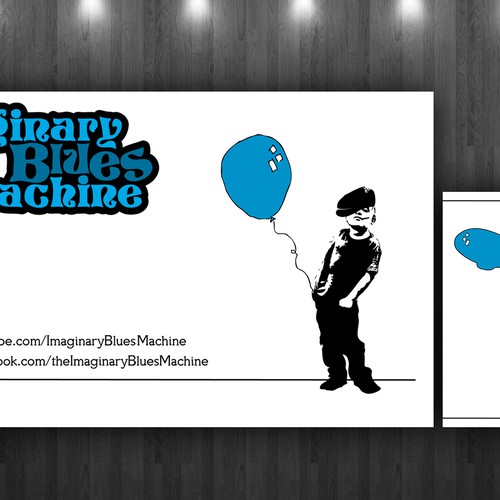 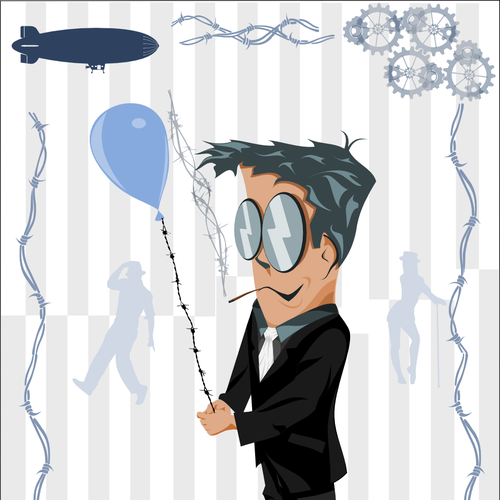 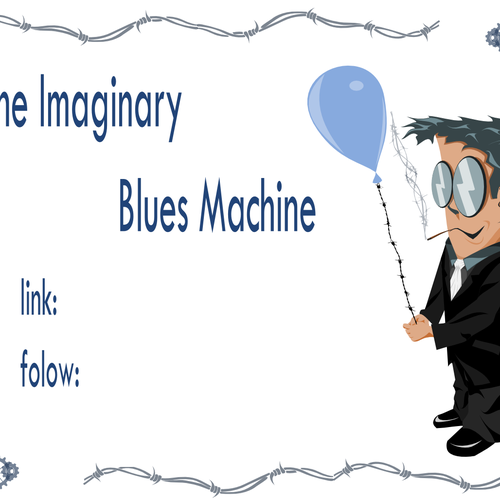 To design an image to go on a card to give out as advertisement, like a business card, but more as a piece of art/logo. Art/logo on one side and a link on the other - to promote the band.
Also the image will be used elsewhere, such as the banner.

The band name is 'Imaginary Blues Machine'. The idea is that in the image a boy will be holding a blue balloon. The balloon will be interchangeable for different "machines" like a plane, tank, hot air balloon, blimp etc on the end of the string he's holding. So we are the imaginary blue machine that keeps 'changing shape'.

Kid must be silhouette.
Kid must be smoking cigarette/cigar
and have flat hat (cheesecutter cap)
Boys emotion: 'not giving a fuck'
Age: 8-10
Name: Jack

The card is to be portrait on the art side and landscape on the other. It is supposed to mimic a playing card. Two of the 'machines' will be in opposite corners instead of the traditional numbers on a playing card.

Thats to give you an idea, its not too strict so play around with that sort of thing.
There are some super rough drawings as a guide.

Start nu je wedstrijd
roller coaster sign design
399 $US
provides amusement rides and related equipment...
56
entries
18
designer graphistes
Create a unique fish-characters for the game
799 $US
Game-development for mobile devices (all platforms)....
72
entries
17
designer graphistes
Futuristic Power Cube !!
349 $
We throw foam cubes at people, our target audience is 10-15 year olds....
60
entries
17
Designer
Create a Heavy Metal Album cover!
549 US$
We are a Swedish Heavy Metal band, Sounding like a mixture of Accept, Metallica and the child of satan.
54
entries
22
diseñadores
Create the new face of my digital "self"
549 CHF
I was once known by another name, but in the meantime I've donned the mantle of my alter ego.
63
entries
25
designer
Country Artist Tour Posters
650 USD
We represent various music artists and creating merch and posters for use on their tours. This particular artist is a co
188
entries
58
designer
Kom meer te weten over kunst of illustratie ontwerpen
Bekijk hoe het werkt