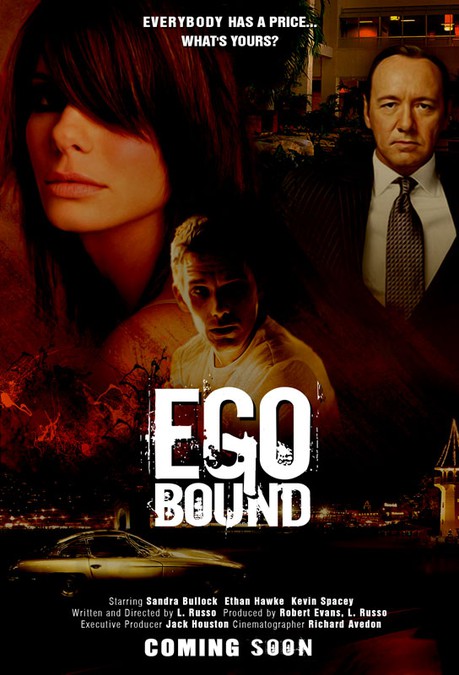 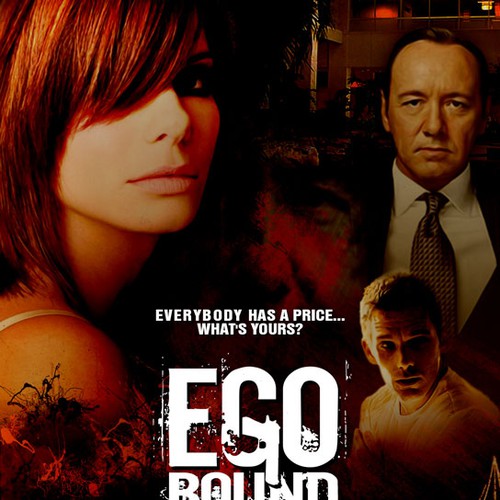 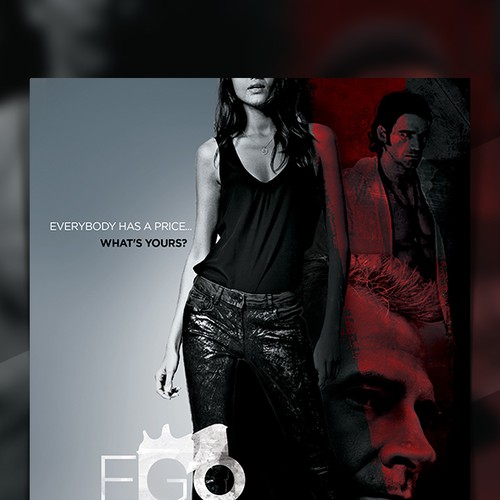 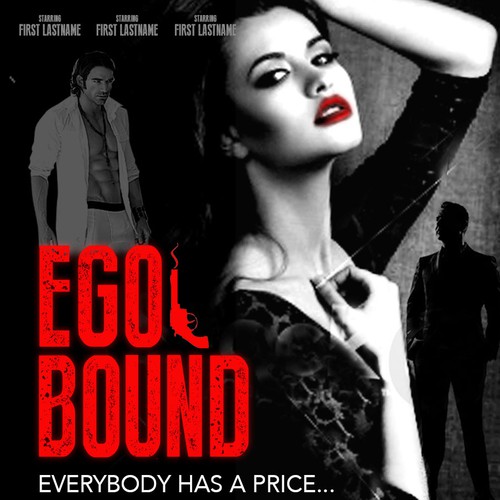 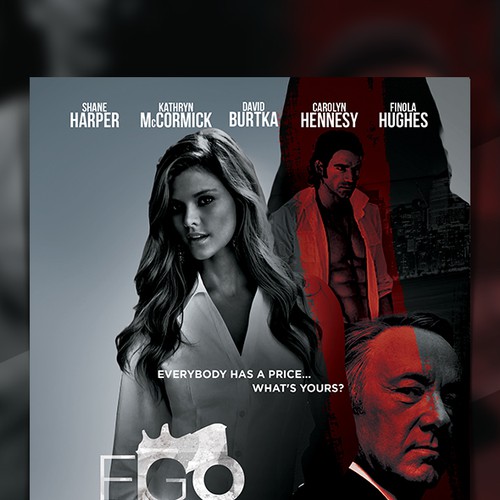 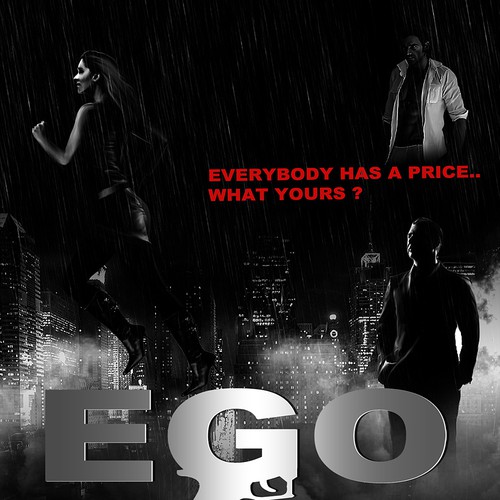 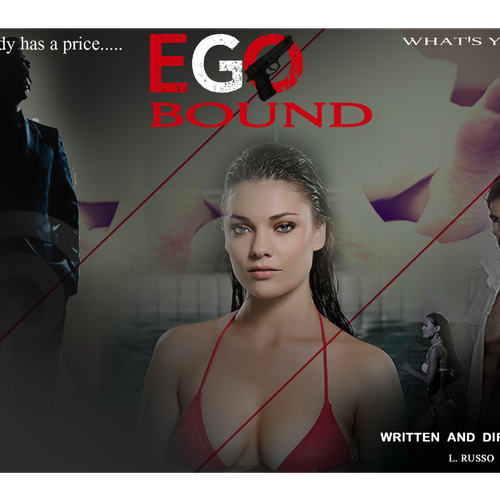 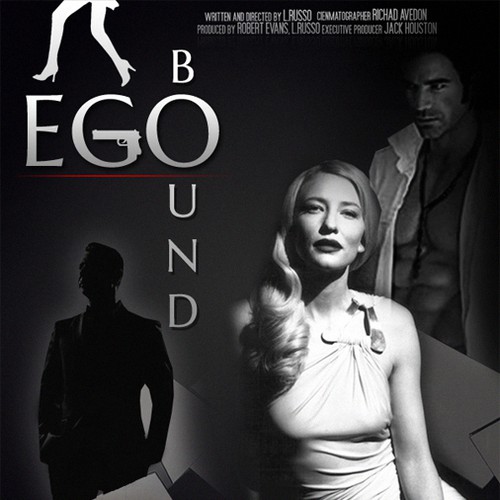 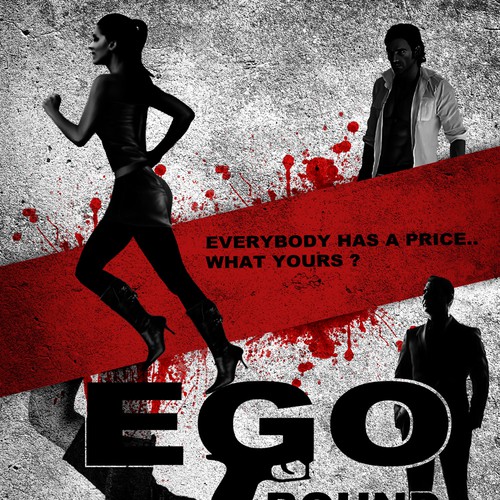 I need a mock-up poster for use in a business plan and to entice investors with an exciting visual mock poster of the film. I don't need it at a super high resolution, won't be blown up huge, just enough to print around 4x6-6x8 max.

The film is a sexy Noir psychological suspense thriller. Along the lines of Basic Instinct/Sleeping With The Enemy/LA Confidential.

The film "Ego-Bound" is about a woman who finally frees herself from an abusive relationship, but he refuses to let go, stalking her. Focused on her career as an artist (painter) She meets a charismatic successful wealthy business man who just might be the contact she needs, only to be catapulted into a world of maladjusted egos, deceit and dysfunction. Putting herself in more danger than she could ever imagine.

The Woman is the LEAD/heroine of the film and is the MAIN focus in the poster.
The other two characters on the poster are the two men. The dangerous stalking boyfriend and the dangerous charismatic older business man. whom both end up trying to kill her in the end.

I have attached a rough sketch(very rough) but it conveys the idea I am going for.

The title "EGO-BOUND" One of the films themes is that EGO is dangerous and destroys people. The title in the sketch forms a T with the O being shared. (See in sketch attached)

This is not an absolute, really would like to see it but  open for other layouts. I would like the G in EGO to be incorporated into a GUN the G being the gun handle. The woman running across the top of the title. Sexy think James Bond movies here/somewhat silhouetted,(not completely black) long legs, super model look,toned athletic body.(she is also a fitness instructor in the film, works out a lot) Long hair wispy, blowing back in the wind sort of look.

The stalking boyfriend would be upper right corner in my layout cropped just below the waist(if you were to use the photo below) and up, looking at her, about 40 yrs old, shirt hanging open, great body ripped abs. Attractive but scary at the same time. Also shadowy image but some details, not crisp or bright. The older business man who ends up trying to kill her when she finds out his buried secrets, would be in the bottom right on my sketch slightly looking up at her( very shadowy image, also below creepy) but in an expensive suit, clean cut decent shape, about 60 years old.

Also in the sketch are rectangles, they would be mirrors starting in the bottom left going behind he images to the top right, maybe a few shattered (mirrors representing EGO) I would like this imagery but not an absolute.

I want to walk the line of being slick James Bond thriller look with a cool Indy edge.

I have attached source photos/imagery from a stock photo site. I have not purchased them yet they still have the water marks. Not sure if they will work for this or if you want to work with your own source images? Also I don't want them to be used as is, I would want them cut out of their backgrounds and alterd. The woman on the beach I would want clothes painted on, no bathing suit, or workout clothes maybe black tights, with a short skirt, boots, tight form fitting what ever it is but NO bathing suit or workout clothes please. I checked all stock footage sites no perfect matches physically, or style of running that I could find.

Also the open shirt guy would need to be more shadowy, cropped at the waist(if using this photo, and dark clothing.) So both reworked in photo shop. The older business man is quite close though. If they will work and need to be bought I will. You might just need them as a reference, idea of what I'm going for.

I am also open to all images being sketched, and all suggestions! You are welcome to use the images provided but by no means mandatory, mostly for you to understand the characters in the film because this is a character driven story so it is necessary to include these characters and elements on the poster, you decide the rest!

Text for poster besides title--
The tag line on the poster is     " Everybody has a price.....what's yours?"

You are welcome to use your own source material/photos.

Finalists updates: I added photos below of Sandra Bullock and Kevin Spacey to use in the poster, I would like to try and make the actual actors photos work. Feel free to use the photos I picked if they work with in your design or find different photos of them just keeping in mind no young pics of them. the Kevin Spacey's character is age 58-65 and Sandra Bullock's character 38-45. Also if you find a different stalking boyfriend image who is a name actor and fits the type that's fine or model that you prefer to use. Age range is 38-45. I added a few photos of Ethan Hawke that work for the stalking boyfriend.

Also an element to include, if you can work it into your design, is a night cityscape the film takes place in LA and San Francisco, prefer night keeping with the suspense mood. Also we need to convey that the Business man character/Kevin Spacey is MEGA Rich, powerful, expensive suit, or great if you can work in an expensive sports car image maybe. Keep Sandra Bullocks character main image,larger the men secondary. Sandra Bullocks character is a painter/artist the film is set against the backdrop of the art world. Elements that might convey that also. This artwork needs to convey who these characters are the world the movie is set in, etc. etc.

Also please do the Title Ego-Bound as one straight line, no-longer crossed. It is hyphenated if in one line or Ego first Bound underneath works also. I do like the gun in the G if it is facing down or a more benign image, if you can make it work. Also create a normal movie credit layout at the bottom of the poster. Also cast names.

Movie Poster Wanted for Kick-ass Action Series
US$ 199
Watch the included trailer to get an idea of the series!
60
entries
27
designers
New art or illustration wanted for Nina Music
299 $US
I am a musician whose music is geared to children 2-6 years of age
107
entries
28
designer graphistes
art or illustration for M.A.D Inc.
399 $US
Entertainer (magician, sleight of hand artist, comedian, escape artist, ventriloquist, etc).
45
entries
12
designer graphistes
Lunatic Wolf Require Artwork for their upcoming album!
649 $US
256
entries
62
designer graphistes
Brian Brushwood Deck of Playing Cards
US$ 999
Design the card backs and box for a deck of Brian Brushwood playing cards!
12
entries
3
diseñadores
London DVD Cover
US$ 399
Films and DVDs...
30
entries
12
designers

Start nu je wedstrijd
Create sexy Dirty Dancing poster for national touring musical
4 199 NOK
Musical & theatre production company and agent...
17
entries
10
designers
The Lost Princess
899 $
Musical and spiritual content for Israel and hopefully world wide
63
entries
16
Designer
Illustration for costume and theme party planning company
349 $US
We help plan themed and or costume parties throughout Denver Colorado. We have trained actors who perform during themed
50
entries
15
designer graphistes
Create the new face of my digital "self"
CHF 549
I was once known by another name, but in the meantime I've donned the mantle of my alter ego.
63
entries
25
diseñadores
Country Artist Tour Posters
650 US$
We represent various music artists and creating merch and posters for use on their tours. This particular artist is a co
188
entries
58
diseñadores
Medieval inspired art for bookmarks & bookplates
899 USD
I write and publish mainstream and literary novels.
42
entries
10
designer
Kom meer te weten over kunst of illustratie ontwerpen
Bekijk hoe het werkt