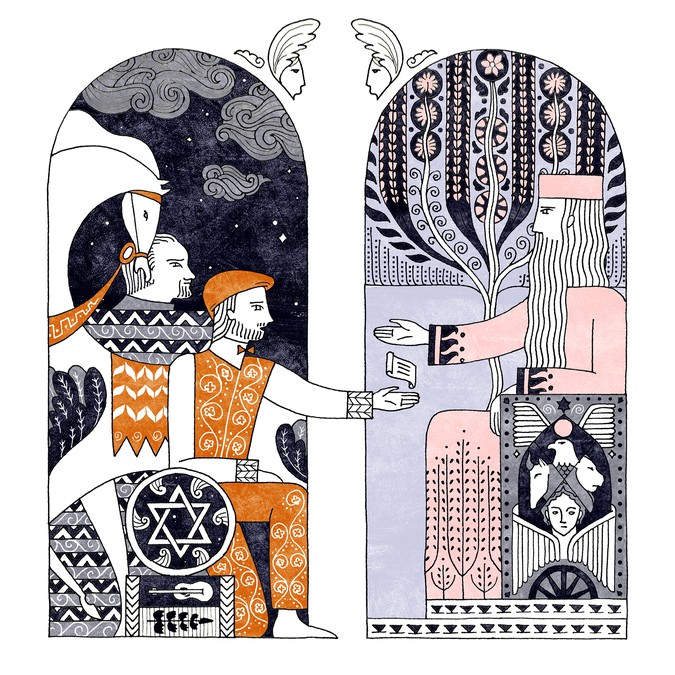 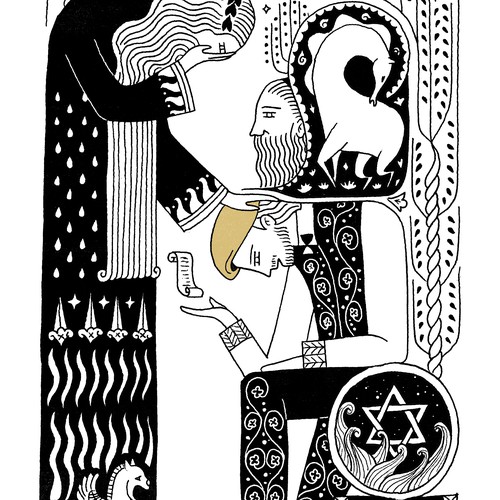 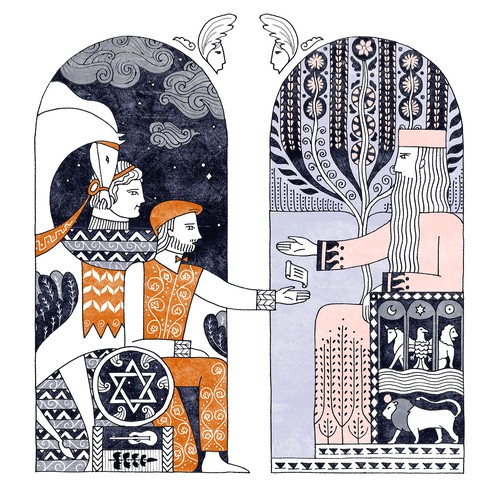 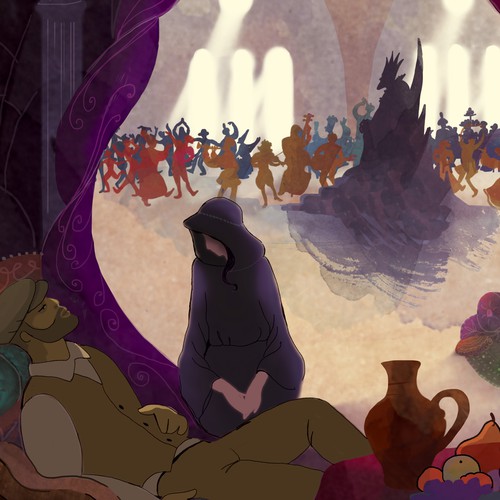 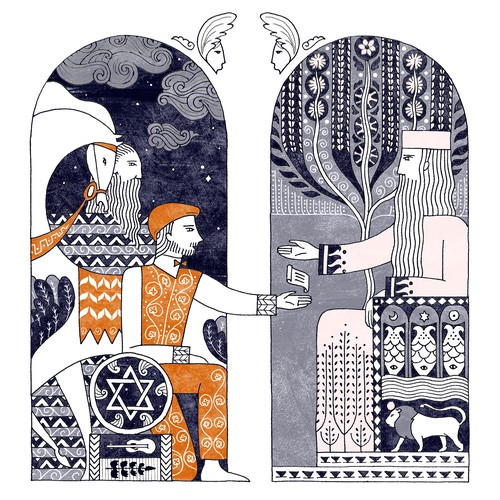 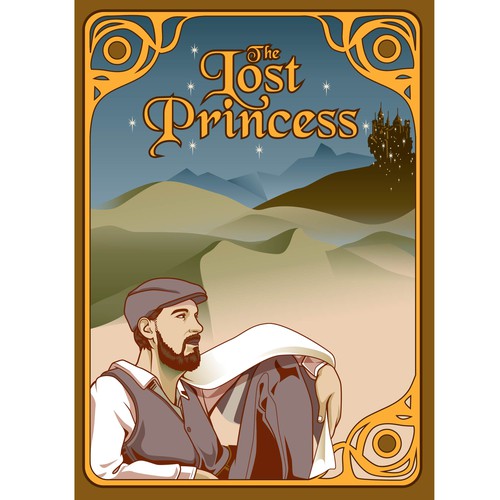 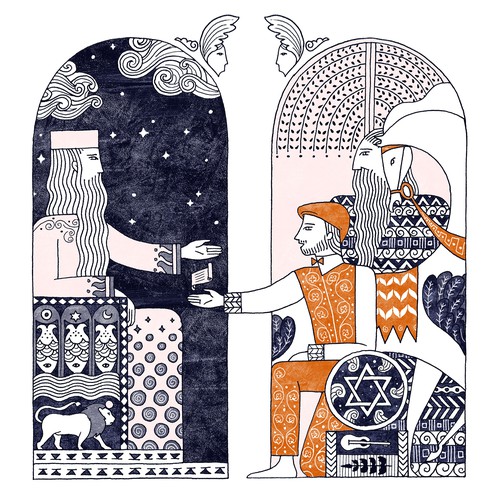 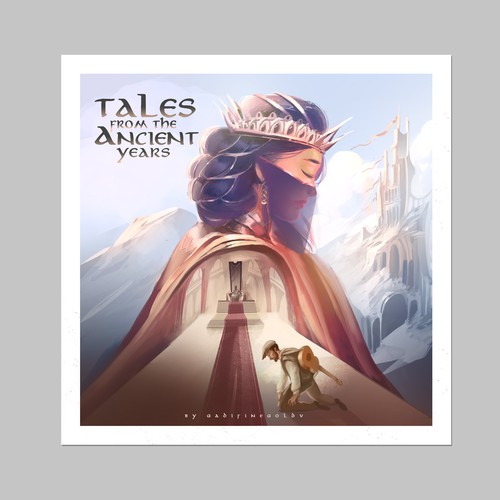 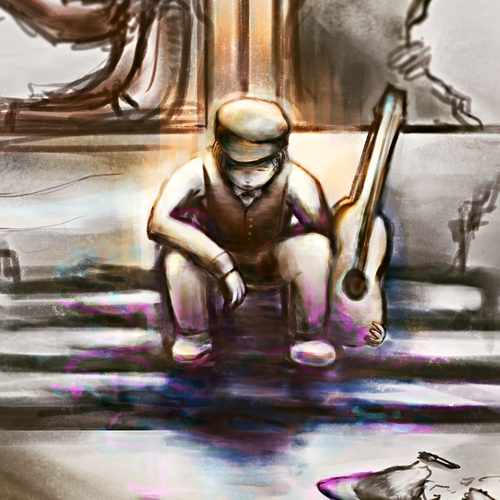 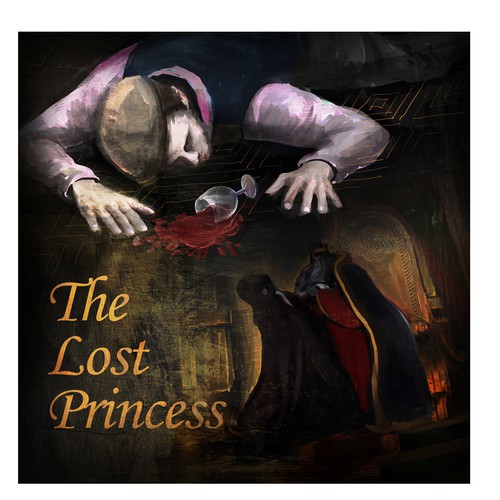 Musical and spiritual content for Israel and hopefully world wide

I am recording a concept album. A rock opera, based on "The Lost Princess", a short story by Rabbi Nachman from the early 1800's. In addition to the album there is a live show in which I act, play and sing. What I need is the illustrations for the album booklet. Let's focus in the contest on one page of the booklet, which describes a scene from the story, and one particular song. This scene is called In the Palace of the Evil King.
The main character - The Wanderer, should be based on me, the way I dress in the play. He has traveled the desert for years along with his trusty servant, looking for the Lost Princess. Now they find themselves in a Palace, full of splendour, food and wine, music and entertainment. After much eating and drinking, the Wanderer suddenly feels weak, and drops in the corner of the room. Drugged and unable to move, he passively watches as the King of the palace reveals himself (red lighting?). He calls for his Queen, who is led into the dark hall, and seated on an empty throne beside him. The Evil King sings "Eat, drink and be merry. You are my prize, I will never let you go." She is clad in a grey cloak, her face is hidden, only her voice can be heard sobbing. The Wanderer recognizes her, she is the lost Princess for whom he has been searching, but now he lies passive, paralyzed with fear and unable to move.

The name of the book from which the story is taken is "Tales from the Ancient Years". I want it to feel like an ancient legend.

You can read an English translation of the original short story here:
http://www.sacred-texts.com/jud/gm/gm31.htm
You can hear the song and watch a short promotional video here:
https://www.dropbox.com/sh/a7xdfxl7…_IB8a?dl=0