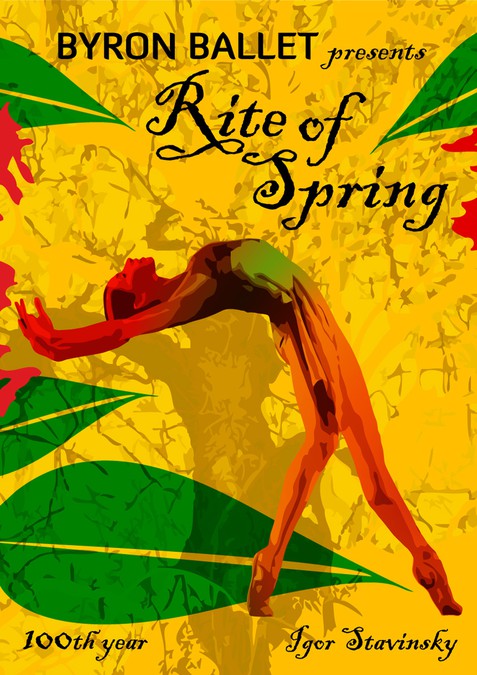 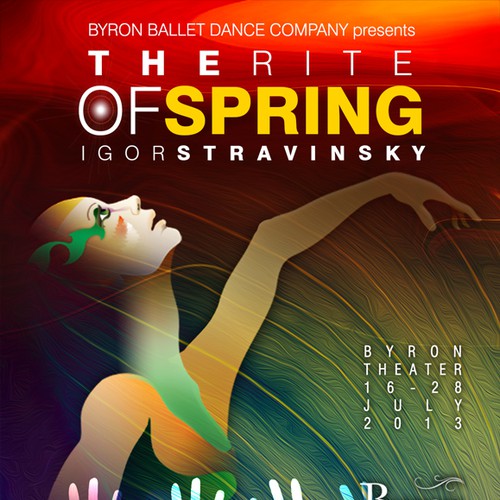 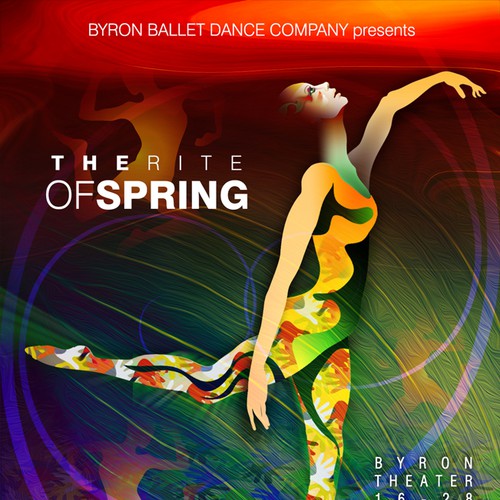 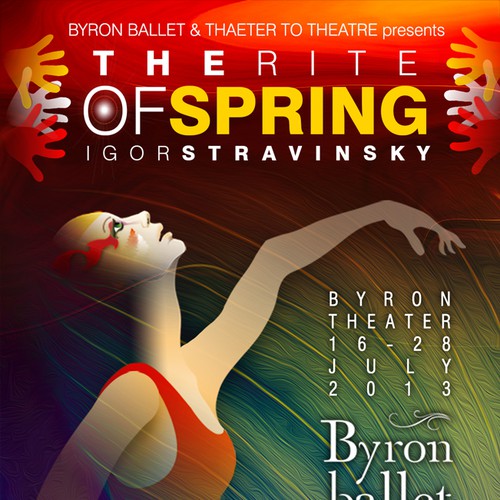 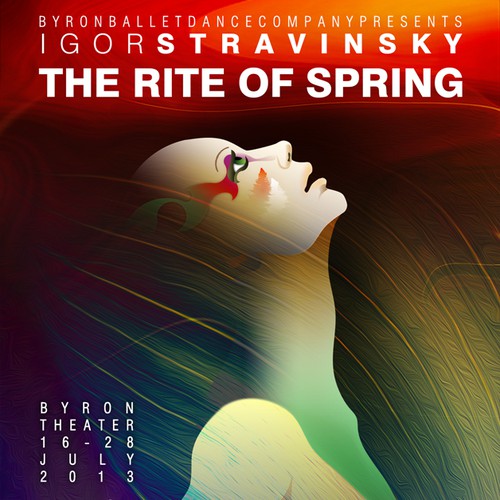 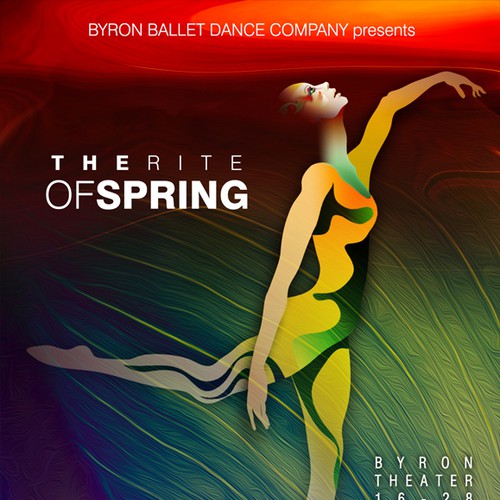 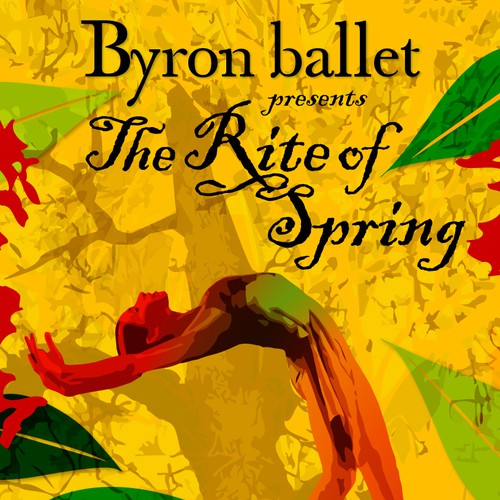 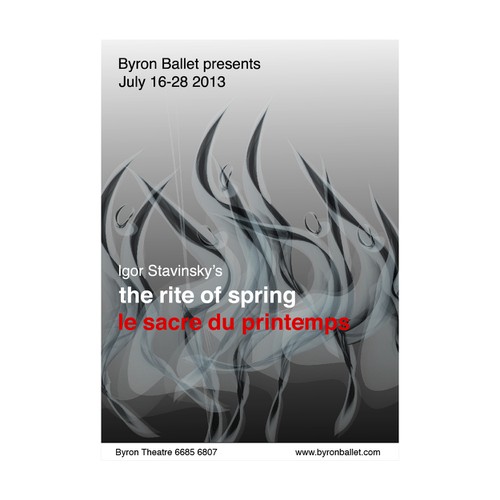 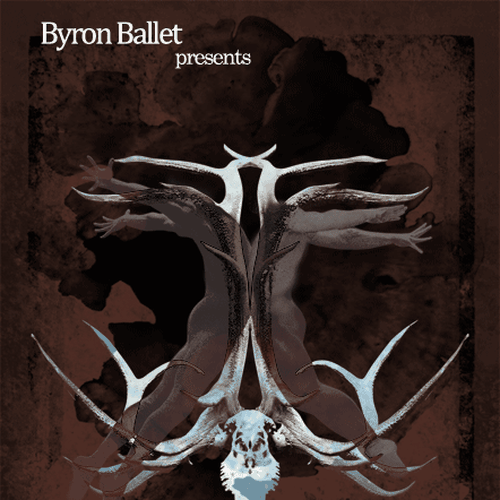 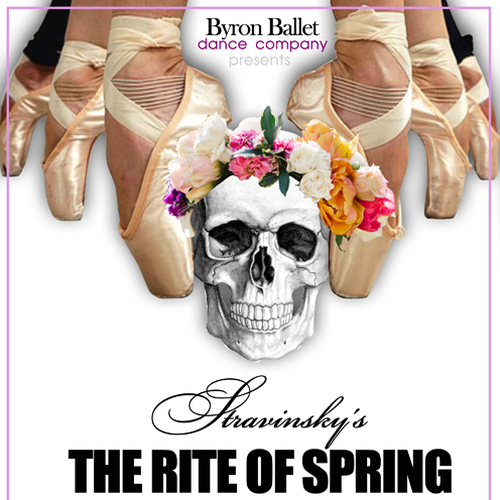 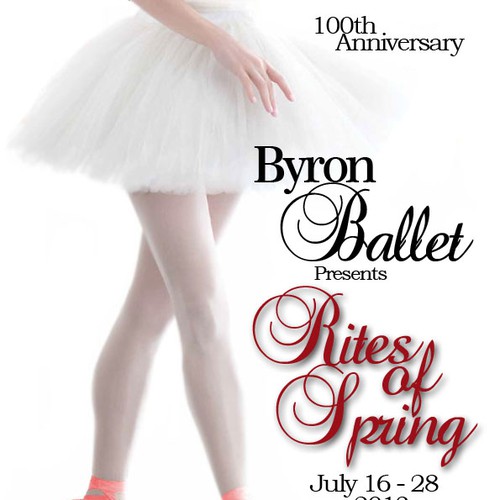 A poster for our upcoming July performance of Stravinsky's famous and notorious ballet, The Rite of Spring.

The ballet depicts the mystery and great surge of the creative power of spring as a young Virgin dances herself to death.

Some notes relating to the original production of 1913:
Stunned the artistic world
"A maleficence foisted upon artistic sensibilities"
"A crime against grace" = Nijinsky's choreography
"Oversteps the limits of propriety in ballet music"
Celebration of life through sacrificial death
"I think the whole thing has been done by 4 idiots" Enrico Cecchetti. (4= Stravinsky, Roerich, Nijinsky, Diaghilev)
"Seriously Ugly"
"res ipsa locquitar"
A pagan ballet
a white tutu affair vs a virgin sacrifice
Stravinsky's vision: .... a solemn pagan rite: sage elders, seated in a circle, watching a young girl dance herself to death....
Yarilo = pagan god of spring
"choreodrama"
a dance of terror is the ballet's thematic climactic scene
"A Sacrifical Dance") by "The Chosen One"
a communal murder on stage
At the start of the ballet is a sacred night .... And it ends with the sunrise, with the first rays of the sun. "
Scandalous
"Stravinsky sat down to play a piano reduction ... Before he got very far I was convinced he was raving mad" ... Monteaux

The scenario:
Part 1-The Kiss of The Earth-
The piper's pipe and young men tell fortunes. The old woman enters.She knows the mystery of nature and how to predict the future. Young girls with painted faces come in from the river in single file. They dance the spring dance. Games start ... The people divide into two groups opposing each other. The holy procession of wise men. The oldest and wisest interrupts the spring games, which come to a stop. The people pause trembling ... The old men bless the spring earth ... The people dance passionately on the earth, sanctifying it and becoming one with it.
Part 2- The Great Sacrifice-
All night the virgins hold mysterious games, walking in circles. One of the virgins is consecrated as the victim and is twice pointed to by fate, being caught twice in the perpetual dance. The virgins honour her, the chosen one, with a marital dance. They invoke the ancestors and entrust the chosen one to the old wise men. She sacrifices herself in the presence of the old men to the great holy dance, the great sacrifice.

For those unfamiliar with The Rite of Spring, thematic ideas may be gleaned from Google Images & there are lots of links on YouTube.
Today is in fact the 100th anniversary if its premier in Paris.

Look at the Byron Ballet facebook page to see the kind & quality of production we do.

We are looking for a poster A3/A4 that is at once striking, shocking & beautiful

Start nu je wedstrijd
Sultry Soul Pop band needs album cover art for new single
$299
We are a "soul pop" band....
172
entries
35
designers
New Board Game in need of Fun Musical Design
US$299
We are designing a board game for adult board game players...
11
entries
6
designers
Digipack Booklet Artwork CD Cover for our new christmas-studio-album.
699 €
We are a German Big Band with nearly 25 musicans. We play not only evergreens but also hit music in our own way. We tr
30
entries
8
designers
Design a cover and 2 interior pages for a shareable youth diary
USD 299
Product: youth diary to be shared among friends
22
entries
13
designers
Magician - Magic Trick DVD
$299
Magician needs a DVD Disc & Case to be designed for a Magic trick teaching DVD. This is a sales dvd that needs to stand
36
entries
6
designers
Gambling Alliance
299 $US
We are a casino affiliate website. We recommend safe & reliable casinos to our visitors.
12
entries
8
designer graphistes
Kom meer te weten over andere ontwerpen
Bekijk hoe het werkt