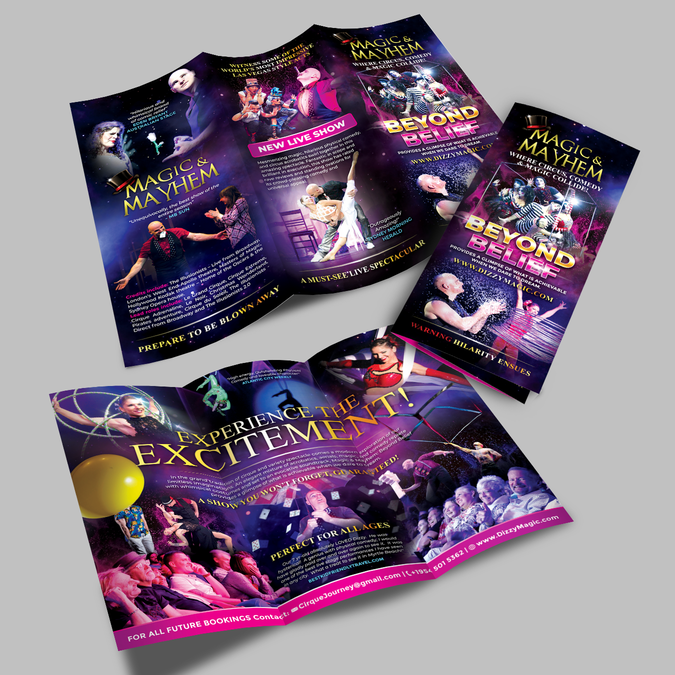 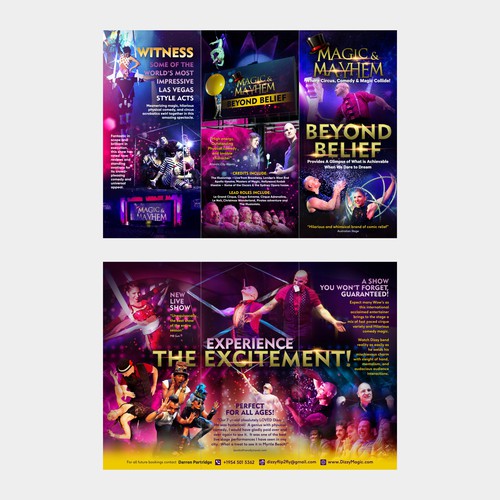 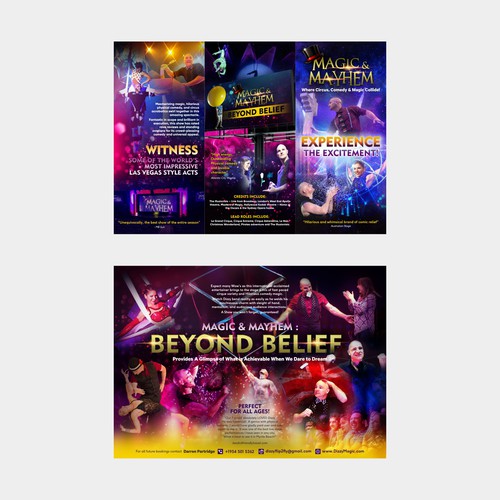 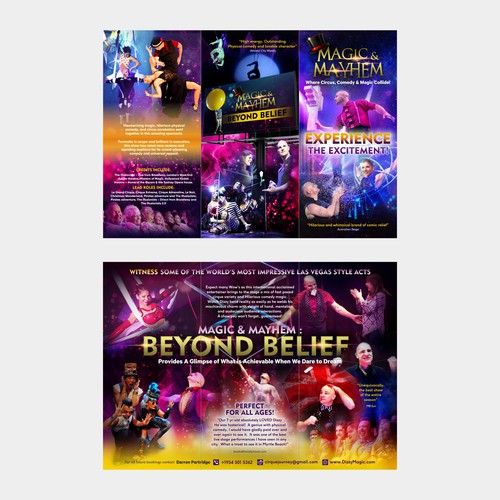 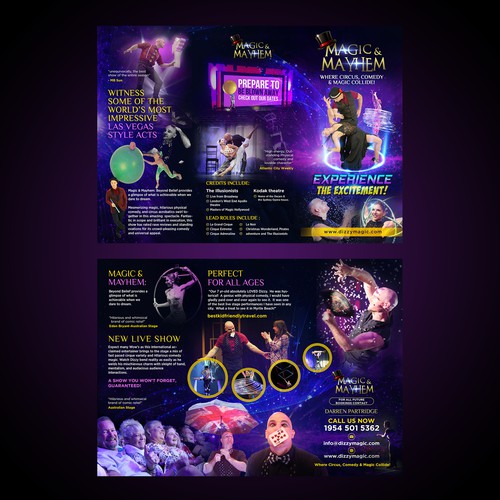 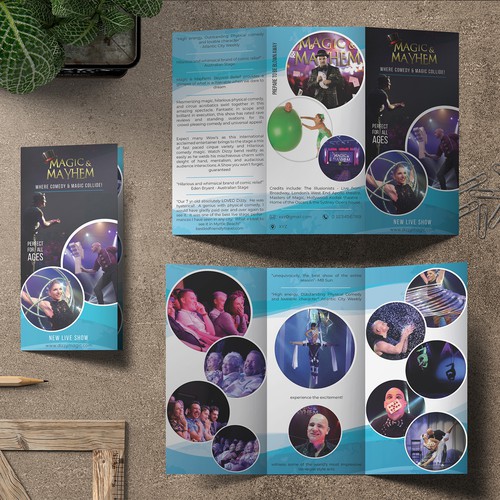 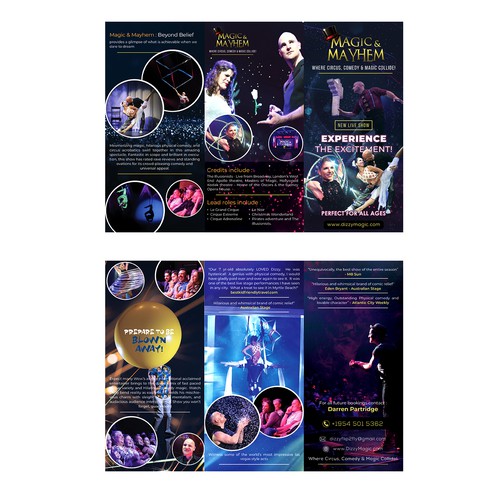 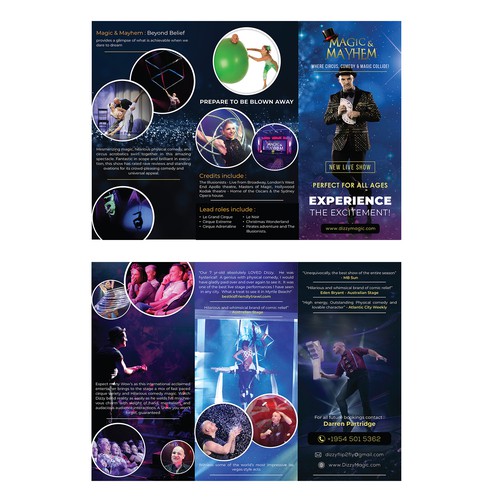 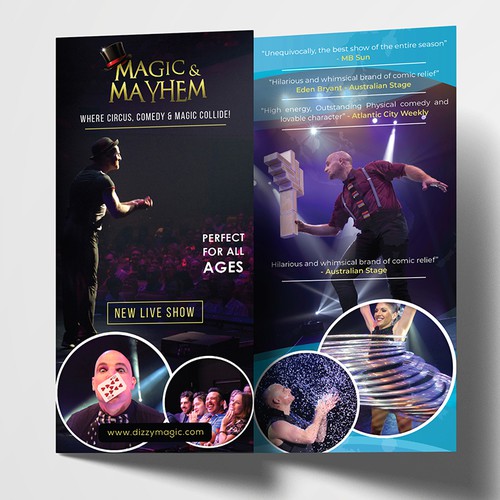 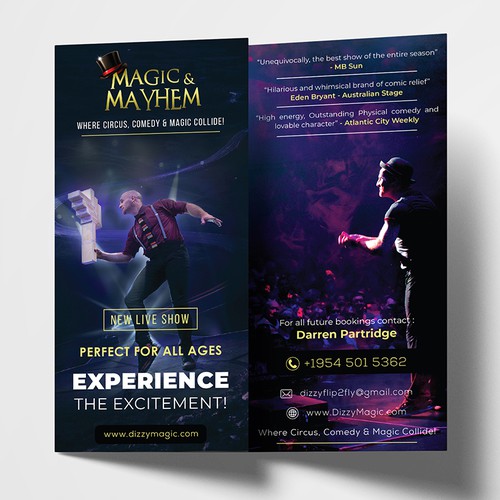 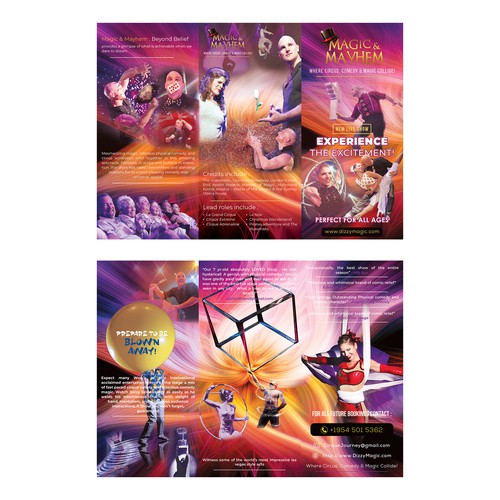 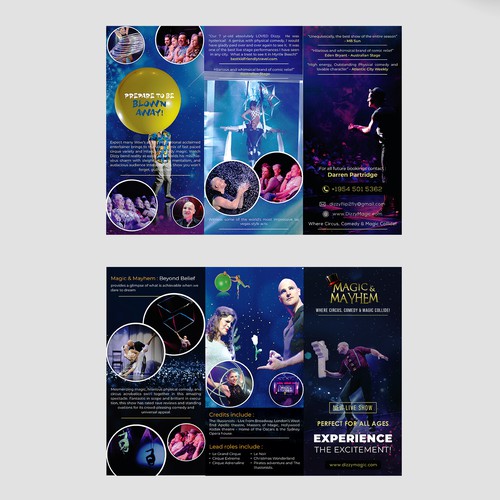 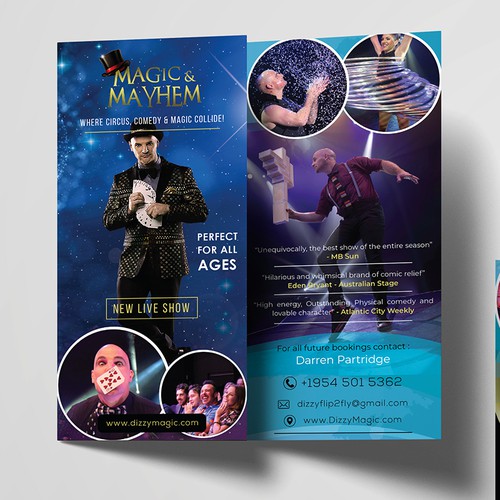 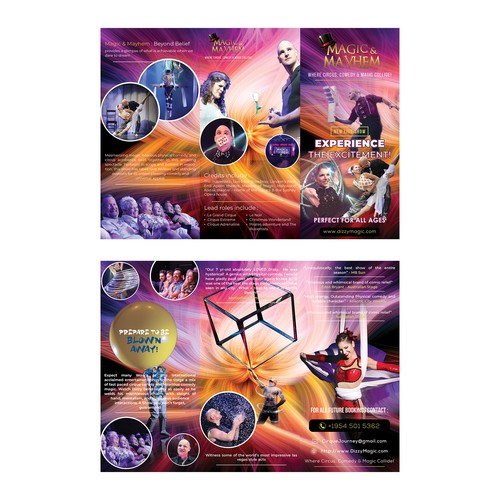 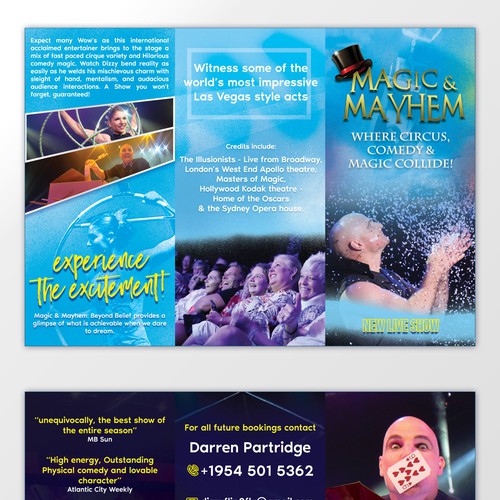 Circus & Comedy Magic show
In need of a stand out Leaflet to promote our production show. The End product will be placed on a Rack Shelf next to other attraction leaflets.

Decription of our show:
Magic & Mayhem: Beyond Belief -Expect many "wows" as these internationally-acclaimed entertainers bring to the stage a mix of fast-paced cirque-variety and hilarious comedy magic. In the grand tradition of cirque and variety spectacle comes a modern exploration of our limitless imaginations. An elegant mixture of Magic, acrobatics, aerials, and comedy replete with whimsical costumes and set to an evocative soundtrack.
Watch Dizzy bend reality as easily as he wields his mischievous charm with sleight-of-hand, mentalism, and audacious audience interactions. A show you won't forget... guaranteed!

Note: We would like to use a Light Blue color as the main background color of the leaflet. (See Magic & Mayhem blue poster attached for this example)

This leaflet will be used in multiple locations... so there needs to be a blank space, to add the theatre location address and contact information, at a later date!

Also, needs to Stand out well on a rack-self. (Rack shelfs have 20-30 different leaflets on them... so easy to read and attractive is important!

Also important: The Name/Title, needs to be clear, attractive and easy to read (Placed on the top 3inches of the front cover. (So it is seen, if the leaflet is stacked behind other rack card leaflets!)

My leaflet quotes and text should include some of the following options:

- Where Circus, Comedy & Magic Collide!
- ‘Prepare to be blown away’ > (D&J big balloon picture)
- Perfect for all ages
- new live show
- witness some of the world’s most impressive las vegas style acts
- experience the excitement!
- “unequivocally, the best show of the entire season” - MB Sun
- “High energy, Outstanding Physical comedy and lovable character” - Atlantic City Weekly
- “Hilarious and whimsical brand of comic relief” - Australian Stage
- Magic & Mayhem: Beyond Belief provides a glimpse of what is achievable when we dare to dream.

- Mesmerizing magic, hilarious physical comedy, and circus acrobatics swirl together in this amazing spectacle. Fantastic in scope and brilliant in execution, this show has rated rave reviews and standing ovations for its crowd-pleasing comedy and universal appeal.

- Expect many Wow’s as this international acclaimed entertainer brings to the stage a mix of fast paced cirque variety and Hilarious comedy magic. Watch Dizzy bend reality as easily as he welds his mischievous charm with sleight of hand, mentalism, and audacious audience interactions. A Show you won’t forget, guaranteed!

- "Our 7 yr-old absolutely LOVED Dizzy.  He was hysterical!  A genius with physical comedy, I would have gladly paid over and over again to see it.  It was one of the best live stage performances I have seen in any city.  What a treat to see it in Myrtle Beach!"
bestkidfriendlytravel.com