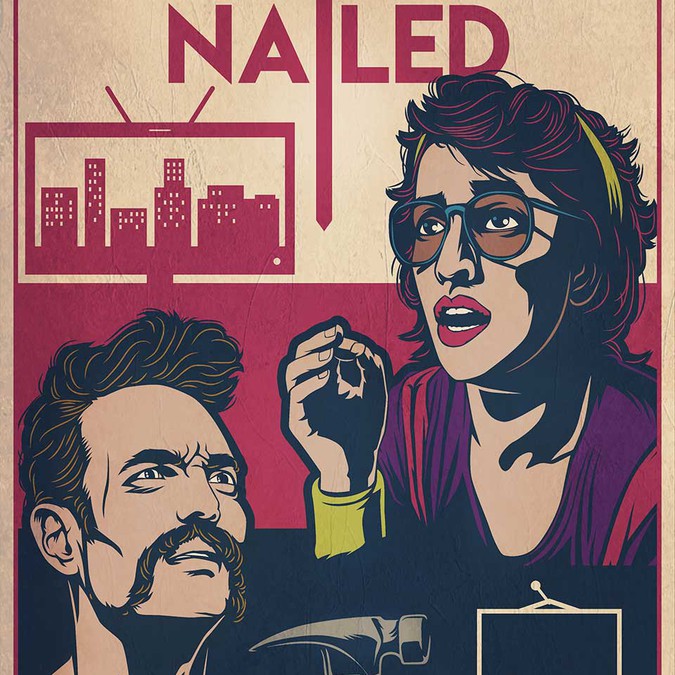 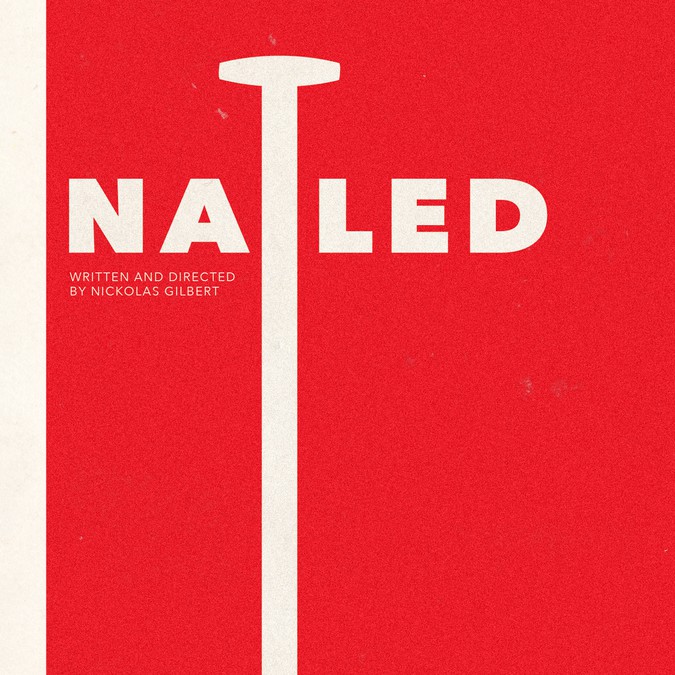 Design a poster for the short film "Nailed" 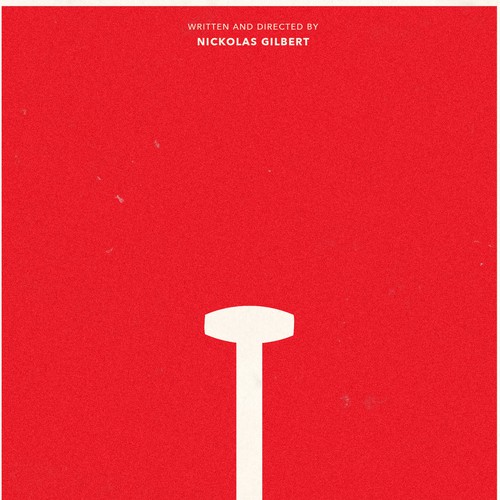 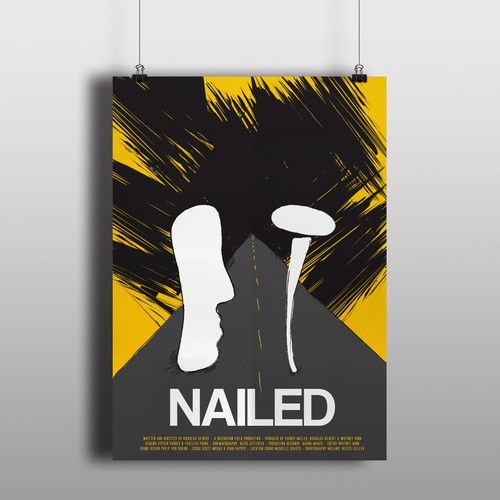 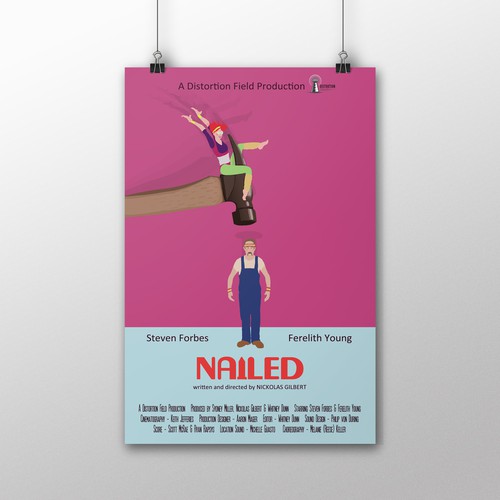 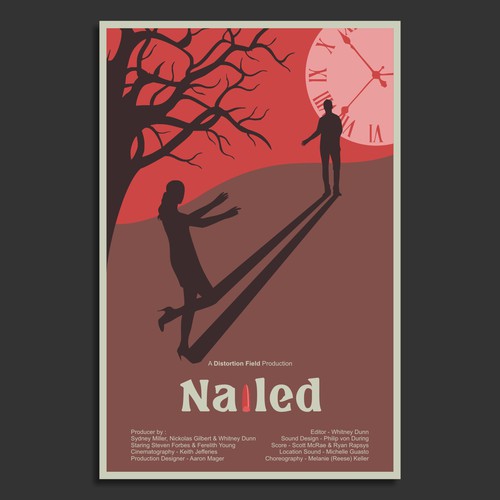 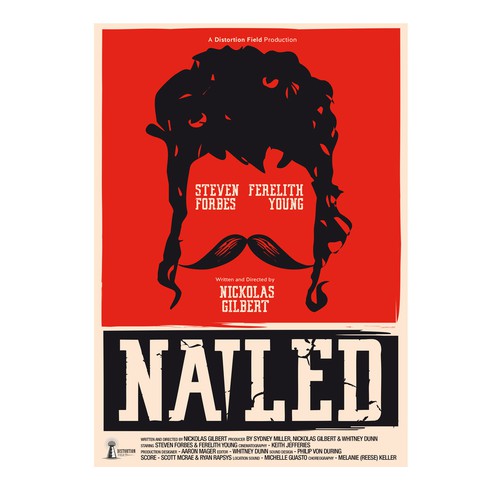 A poster for our short film "Nailed."

Nailed is a highly stylized film. The poster should be too... While it can have modern elements, I typically like film posters that have a vintage element to them, be it in the texture, minimalism, silk screen, limited color pallet, etc.

The film is basically about a couple that broke up years ago and now fate has brought them back together again. There is no dialogue in the film. Here is the basic concept: Roberto has moved into a new apartment and is hanging a painting of his lost love, but he uses a ridiculously long nail to do so. When he hits the nail on the head he hears a loud moan, like a woman enthralled in ecstasy. Since he is alone he assumes it's the painting and goes to town on the nail with the hammer, each time being rewarded with a more pleasurable moan. Eventually we track through the wall and find Sophia, his long lost love, who is working out to an 80's aerobic routine. The moans are actually her doing the routine. But, unbeknownst to her, the nail goes through the wall and impacts in the back on the tv, causing it to short out. When she slaps it to get the signal back, she hears a moan like a man in the throws of ecstasy, so she slaps it some more and is rewarded with more moans. Tracking back through the wall again to find Roberto, who has sent the nail all the way through the wall, straining to pull the nail head out of the wall so he can actually hang the painting. He finally pulls the nail out, but in the process it creates a huge hole in the wall and the hammer falls and rips through the painting. In the end, framed through the rip in the painting, Roberto looks through the hole and finds Sophia, his long lost love.

As you can see in the reference files, I tend to award figurative imagery over literal work. That said, use the reference shots to create viable and iconic imagery, but stay away from cut and paste of actual photographs as that style won't be awarded. I would rather see a drawn version of one of the characters in the reference photos over an actual photo. Give me an abstract, iconic representation and you'll win.

Poster necessarily includes:
NAILED - I would like to a "nail" used in place of the "i" in the title
Written and Directed by Nickolas Gilbert
A Distortion Field Production
Producer by Sydney Miller, Nickolas Gilbert & Whitney Dunn
Staring Steven Forbes & Ferelith Young
Cinematography - Keith Jefferies
Production Designer - Aaron Mager
Editor - Whitney Dunn
Sound Design - Philip von During
Score - Scott McRae & Ryan Rapsys
Location Sound - Michelle Guasto
Choreography - Melanie (Reese) Keller
(we may reduce or add credits based on the final design)
It should subtly include the Distortion Field logo, which is located with the attachements

Movie Poster for psychosexual thriller, "The Painter"
US$299
Film. Target audience 25-65.
69
entries
18
designers
create a movie poster for a thriller movie
$199
we are releasing movies on Video on Demand in France, on platforms like ITunes
48
entries
20
designers
Short film poster for a twisted drama!
US$199
We are filmmakers. Poster is to market our short film online and at film festivals we get accepted to.
71
entries
16
designers
Major Professional Theatrical Production Poster Contest
$199
Live theatrical production company producing the world premiere, family musical, Mutt House.
19
entries
6
designers
Create a film poster for odd-couple movie Godspeed
US$599
We are film distributor.
68
entries
14
designers
Unique, Eye-Catching Poster for Outdoor Greek Theatrical Production
$265
I am leader of a theatre group that focuses on creating and telling stories about women. I want to advertise a public pe
52
entries
15
designers