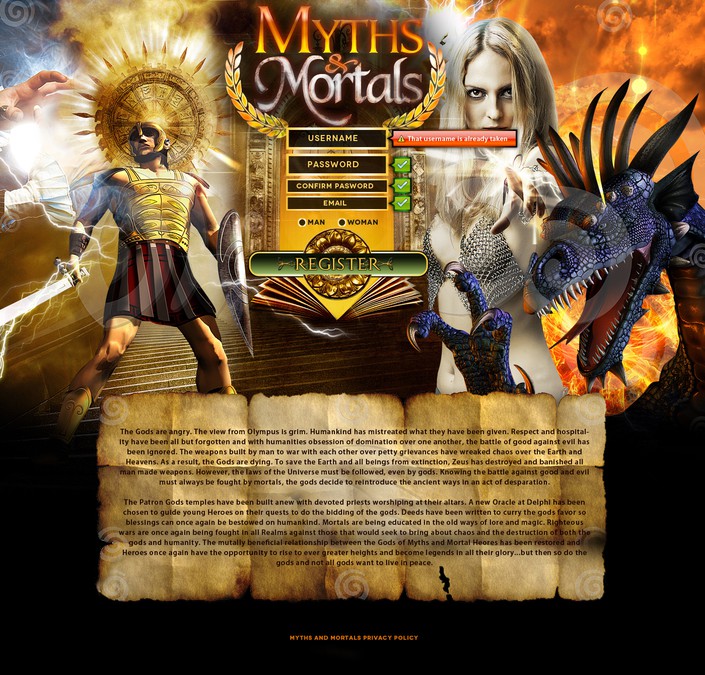 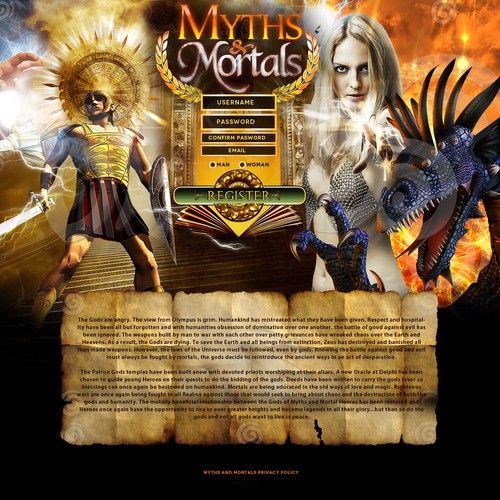 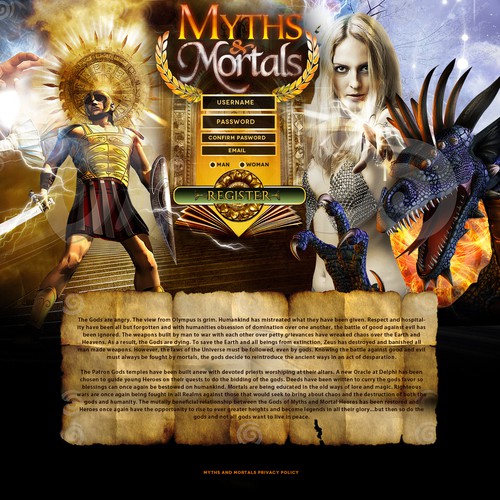 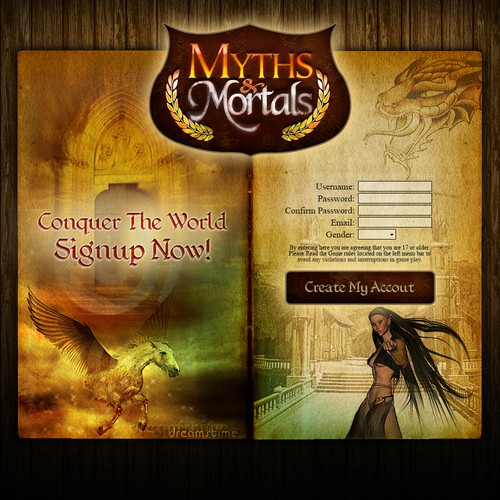 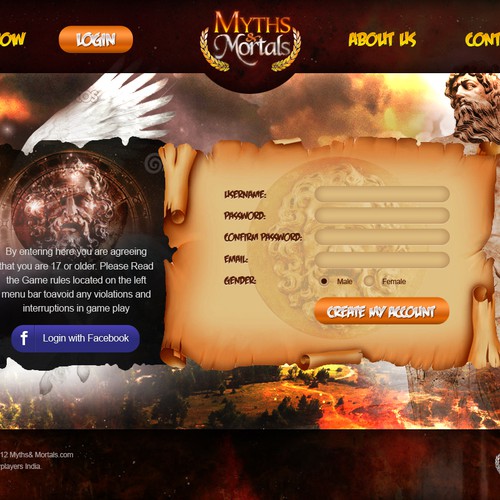 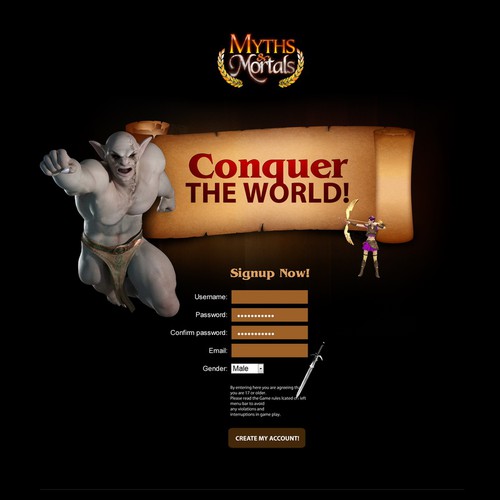 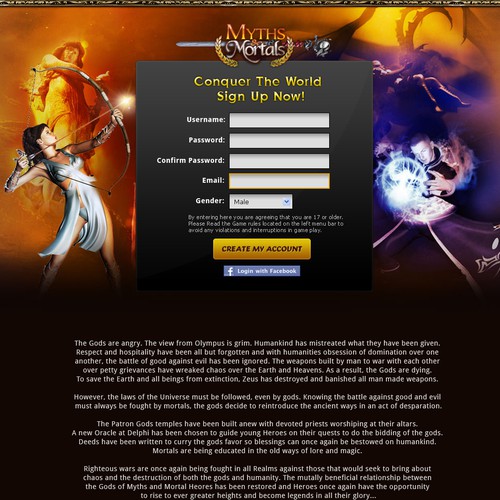 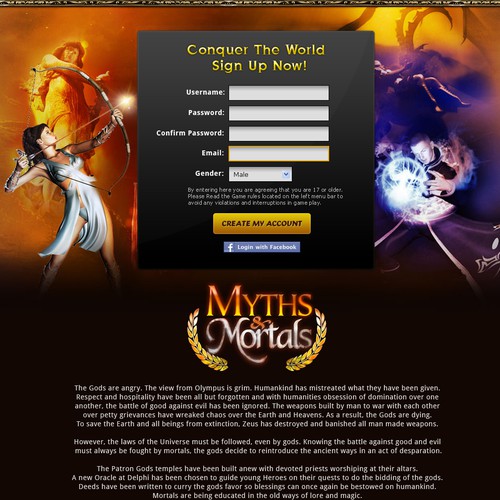 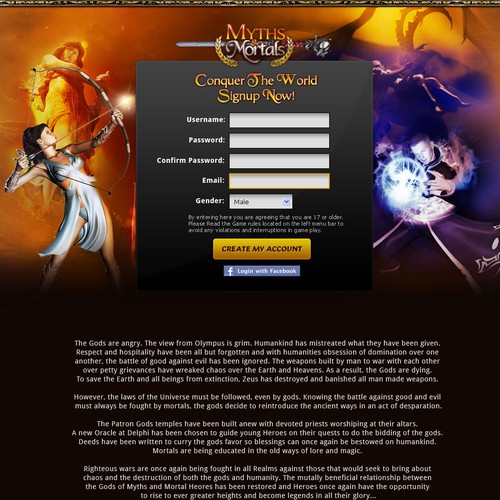 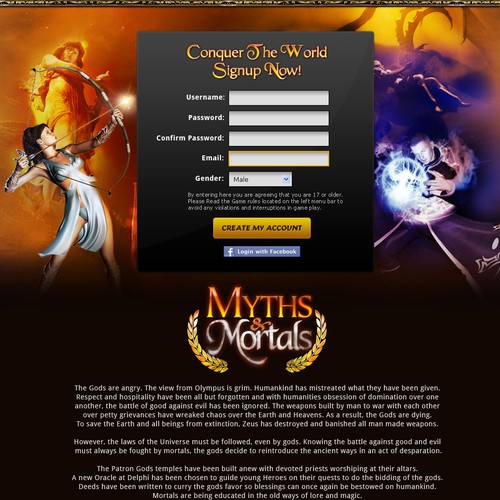 Myths And Mortals is an online role playing game that has been online since February 2012. The game features Mythological characters such as the gods (Zeus, Athena, Aphrodite, Poseidon, Hades to name a few) as well as mythological creatures including Cyclops, Pegasus, Nemean Lion, Hydras, etc. There are also Gladiators. However, it is important to note the game has a very strong Magic influence. Players battle using magic spells and have a spellbook used for various magic tasks. The game is for people age 17 and Older, so the design should be targeted to Adults and not children. Using a "Sexy" image or two is encouraged.

Future plans for the game include branching out into other areas of mythology such as Dragons, The Elements (Air, Fire, Water, Earth Air), Merlin, Avalon, or even some Egyptian Gods. So do not be afraid to get creative. We have an open mind and want something that is outside the box and very creative.

Some image ideas for consideration. They are not required, just some ideas to get folks started

We are looking for a single page, a Landing Page where visitors arrive after clicking on a banner link to our site. On this page, they will register and create an account on the game. The end goal of this page, is to inspire people to take the time to fill out a registration form and enter the game. Pay special attention to the Submit button on the registration form.

Current Landing Page. This is for example ONLY. We are looking for something very different from this, not more of the same
http://adwords.mythsandmortals.com/Tartarus.php

Copyrighted Images. ALL images used in the design must be of legal use. This generally means they come from istockphoto.com, stockphoto, shutterstock.com, or other legal sources such as new custom art. We've had great entries in past contests which lost because the graphics used were copyrighted. We will not be offended if submissions have water-marks in place, as long as winning designs are without them. Computer Wallpaper sites ARE NOT sources of legal use material.

Although using a variety of images is helpful in inspiring different people, be careful not to have a design that is too cluttered. The focus of the page is still to get people to fill out the form and create their account.

We have run several 99designs contests in the past and have ALWAYS spent a lot of time providing feedback and assisting designers in perfecting their entries.

It would be helpful to keep in mind that many Internet users across the world have lower screen resolutions than others might.

If the winner has a portfolio they would like Linked at the bottom of the final landing page on our site, we are willing to offer that in addition to the prize. Please understand, if the winning design doesnt produce results once launched, it may be removed in favor of current options. We always have to go with what works best and generates the most signups.

Webdesign Needed for Flaxi - Anonymous Comments
US$ 899
Avery simple website to capture anonymous questions, or comments on a specific topic. A signed-up user can create a topi
50
entries
10
diseñadores
Christmas on the Ranch website design
899 USD
Individuals wanting a fun night with family and friends at Christmas on the Ranch to enjoy this special season. Includes
32
entries
14
designer
Design a package box for a couple game
€ 500
female, 30-45 years old, married, 2 kids, suburban located buys our game to improve the relationship with her husband
114
entries
30
Designer
Create a heartwarming logo for our couple game brand
269 €
We create games for couples to improve their relationship by communicating, supporting each other or experiencing new da
133
entries
42
designer graphistes
Professional video gaming logo tournament provider
299 $US
We are a tournament provider for video and card games. Our focus is to bring high stakes winnings to an amateur player b
50
entries
12
designer graphistes
Online casino
599 US$
An online casino that focus on crypto currency.
57
entries
27
designers