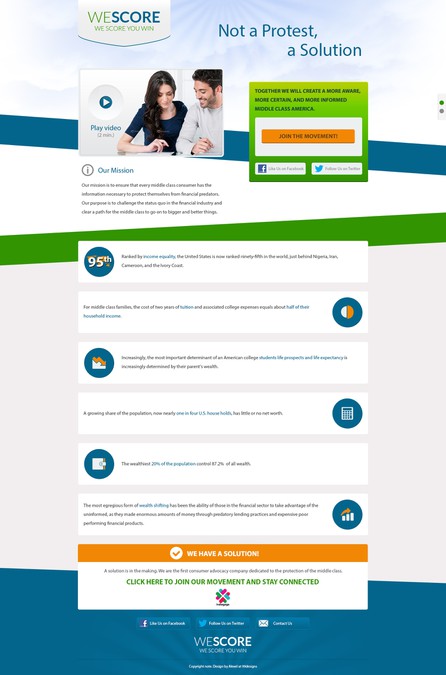 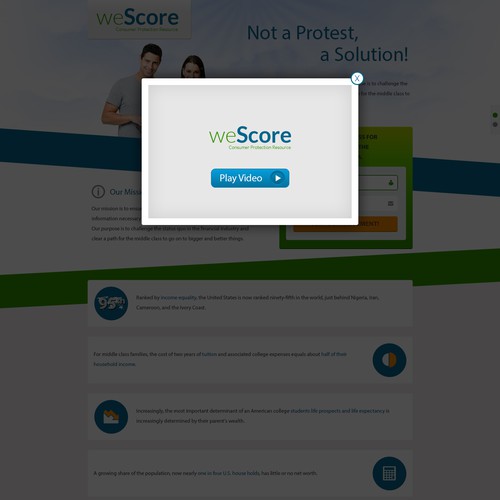 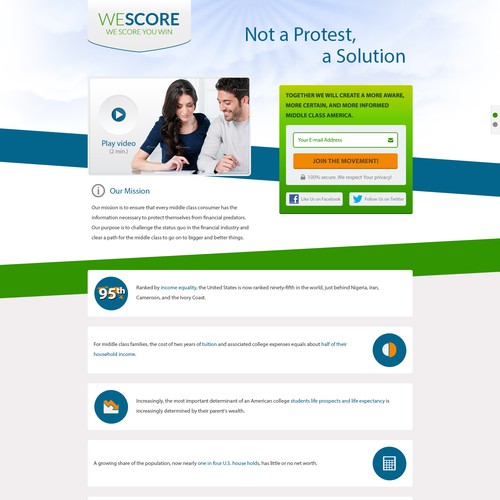 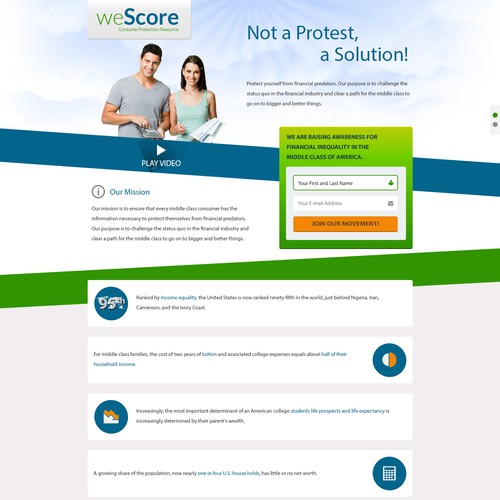 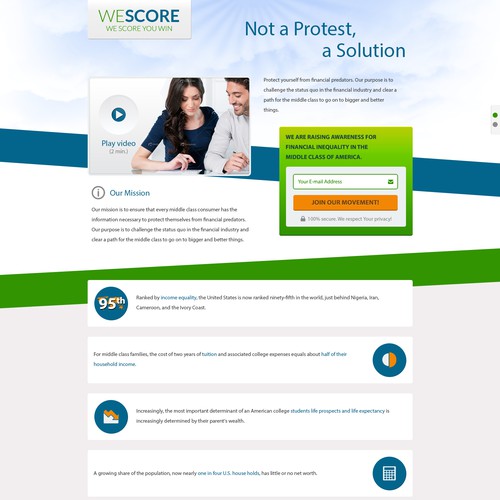 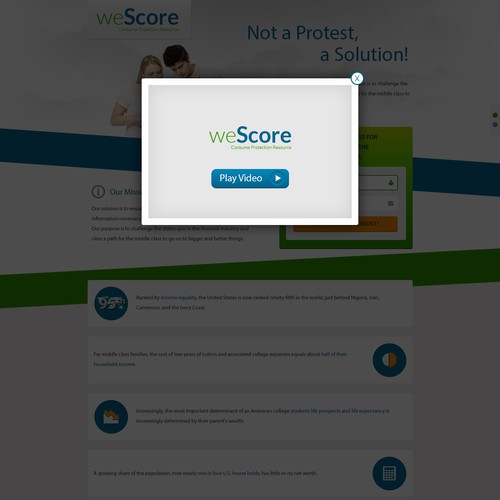 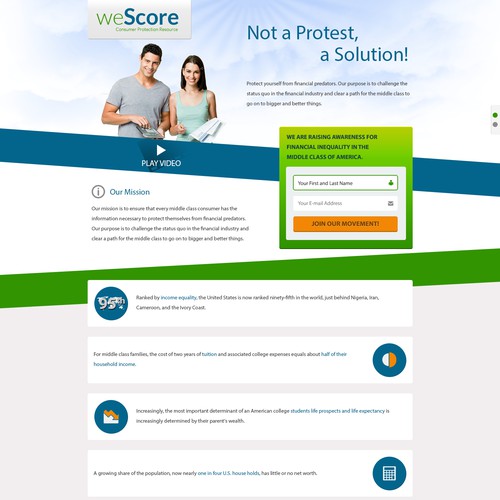 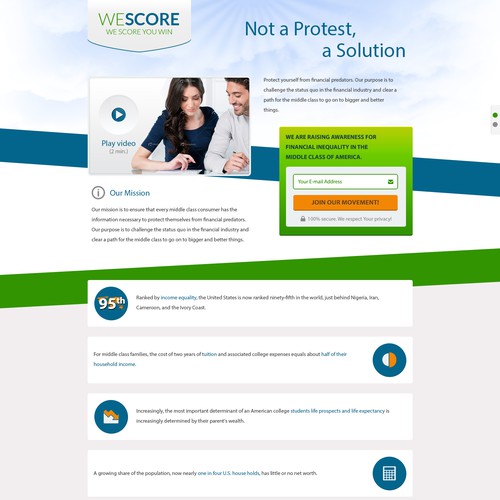 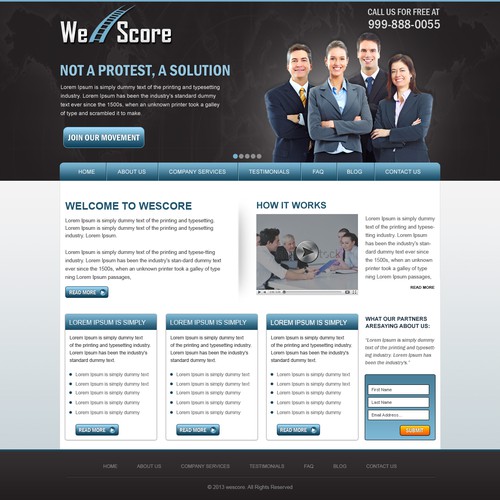 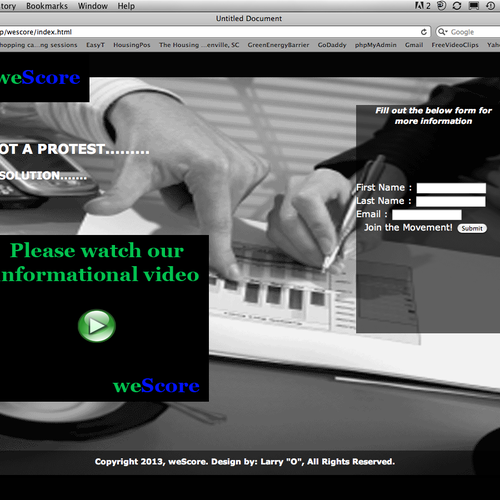 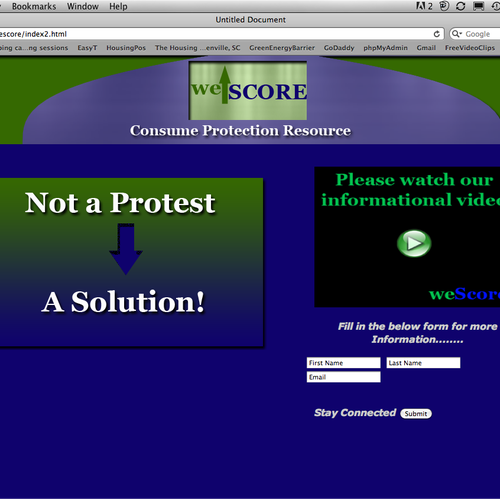 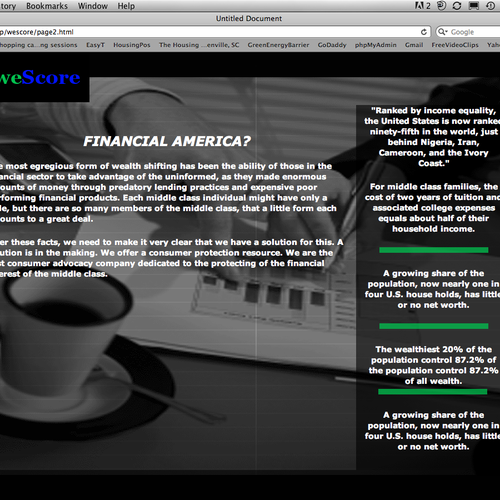 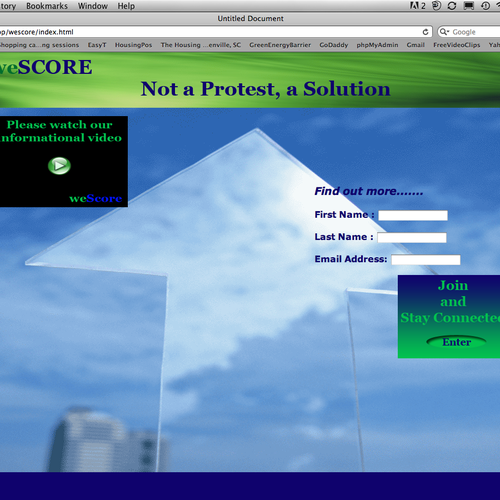 Our target audience is middle class individuals in there 20s and 30s. We are raising awareness for financial inequality in the middle class of America. Our mission is to ensure that every middle class consumer has the information necessary to protect themselves from financial predators. Our purpose is to challenge the status quo in the financial industry and clear a path for the middle class to go on to bigger and better things.

We want everything to look very professional and evoke emotions in our target segment. We need this website to be very compelling.

For out weScore logo. We would like the we to be green and the Score to be capitalized and dark blue/navy. Underneath weScore we would like Consume Protection Resource to also be written in the same font, smaller and a matching green..

We would like to stick to a green and dark blue color theme. We would appreciate photography of middle class people/families.

For typography, we would like very straight modern fonts. We want everything to flow smoothly.

on page 1:
This is a landing page. It will need a headline that will match the ad people click on. A possibility for this headline could be "not a protest, a solution"
We would like weScore written at the top.
We have a video we will be embedding so we will need a spot for that. We havent completed the video yet.

On the right side of the page we need a form where people can enter in their first name, last name, and email address.

The call to action button should read something along the lines of join our movement or stay connected etc.

Scrolling down to page 2

Page 2:
We need information on the financial quality in America to be portrayed.

We need an easy way to convey information. How your portray that information is up to the designer.

Some facts we would like included:"Ranked by income equality, the United States is now ranked ninety-fifth in the world, just behind Nigeria, Iran, Cameroon, and the Ivory Coast."

For middle class families, the cost of two years of tuition and associated college expenses equals about half of their household income.

Increasingly, the most important determinant of an American college students life prospects and life expectancy is increasingly determined by their parent's wealth.

A growing share of the population, now nearly one in four U.S. house holds, has little or no net worth.

The most egregious form of wealth shifting has been the ability of those in the financial sector to take advantage of the uninformed, as they made enormous amounts of money through predatory lending practices and expensive poor performing financial products. Each middle class individual might have only a little, but there are so many members of the middle class, that a little form each amounts to a great deal.

After these facts, we need to make it very clear that we have a solution for this. A solution is in the making. We offer a consumer protection resource. We are the first consumer advocacy company dedicated to the protecting of the financial interest of the middle class.

At the bottom of the last page, or wherever you feel it looks the best, we will need links to FaceBook and Twitter.

We need this website to be especially compelling and inspire people to sign up to receive more information about our cause and our solution.

Create the next fintech unicorn website (detailed specification)
2 855 €
We provide business loans to small to medium businesses in Europe. Using our proprietary lending algorithms we can score
147
entries
23
designer graphistes
Create a stand-out design for corporate about us subdomain site
$ 3’099
National Debt Relief is the best-rated debt settlement provider in the United States of America. We work on behalf of ou
99
entries
19
Designer
Rebranding of existing web application
US$ 749
The site is an internal application that displays transactions and document to users.
37
entries
26
designers
Website design for a solar investment company
899 USD
We offer an innovative, sustainable and unique investment opportunity in solar. Our target audience is individual and in
199
entries
34
designer
Easy Money, if you follow my Instructions - Financial Comparison Page Design
549 €
I would like to set up a financial comparison portal by testing and evaluating financial products. I myself have been a
5
entries
2
Designer
Simple Machine Capital
299 $US
Simple Machine Capital is an investment firm that provides capital to renewable energy and technology companies.
92
entries
11
designer graphistes

Start nu je wedstrijd
Create a professional and trustworthy logo for a new business that helps people in debt
$899
Call center that takes calls from people who are dealing with crippling amounts of debt and helps guide them towards a s
168
entries
49
diseñadores
Investment Firm looking for a logo to signify trust, prestige, professionalism, and growth
899 $US
We are a family office that invest in many industries. Our target audience are other financial firms to be strategic par
62
entries
37
designer graphistes
Create a Slider our Bitcoin ATM's
299 $US
We provide customers a way to buy and sell Bitcoin with cash at our Bitcoin ATM's. Our Bitcoin ATM's are generally plac
64
entries
19
designer graphistes
Design a modern & unexpected logo for a start-up accounting firm
639 $US
We are a group of CPAs (Certified Public Accountants) dedicated to providing accounting, tax and advisory services. Our
22
entries
16
designer graphistes
Monogram Logo Design for self branding
499 $US
Retirement income plans. target audience is baby boomers with liquid net worth over $500,000
84
entries
25
designer graphistes
Modern "Elevate" Symbol for my consulting firm
CA$ 399
Accounting and Tax Consulting
396
entries
92
Designer
Kom meer te weten over webpagina ontwerpen
Bekijk hoe het werkt